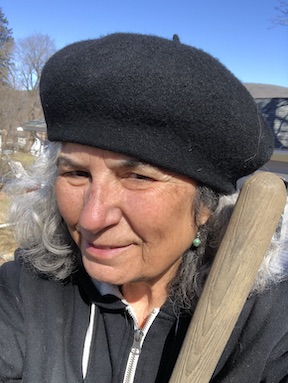 Ever since the snow melted, I’ve wanted to dig in the dirt. My flower beds will stay undisturbed until it gets much warmer, but my initial focus is on expanding my vegetable garden. So, yesterday, I got a shovel out of the garage and began. Like other things that I do, including my writing, it’s a matter of starting and keeping with it.

I had a vegetable garden I built at the other homes we owned. But the one we have now in Shelburne Falls has a very small yard largely shaded by large trees that thankfully keep the house cool during the summer but don’t permit much sunshine. Then there are the deep slopes and one large swarth of level land the previous owners unfortunately allowed to be consumed by the invasive Japanese knotweed that is so difficult to remove. The only spot for a garden is at the top of the backyard hill that abuts land owned by the Catholic Church next door.

So, I created a garden from the grassy, weedy spot. I removed what was growing and then proceeded to supplement the soil — I dug down about two feet — with compost and manure. In the end I had a 5-by-10-foot garden read to plant last year.

I didn’t expect much. After all it takes a while to build a soil’s wealth and there had never been a garden here. I was also warned not to grow anything the deer that wander in from the woods might like. That first year crop included tomatoes, three kinds of peppers, onions, beans, and squash, including a couple of volunteers that came from seeds from the compost. It was a decent first effort. (I also planted garlic in the fall for this year’s crop.)

My focus this year is expanding to the areas I covered with black plastic — I recycled the compost and manure bags — to kill what had been growing there. So itching to get started, on my first dig, I expanded the original plot by 18 inches on each side. Now, there are two deep, long trenches ready for compost and to be backfilled with the dirt I saved plus other nutritional stuff I will add. It wasn’t that warm yesterday, but the sun was strong enough that I shed my jacket.

Frankly, I don’t do much thinking in my garden. For me, digging is one of those “be here now” experiences. Yesterday, I forgot about finishing our taxes and other stuff on my to-do list. I pushed the shovel into the ground with my foot, shook out the dirt from the dead plants before tossing them into a hole I’m trying to fill, and lifted the soil on top of the existing garden for later. Today, I will work on the vertical expansion. Tomorrow we’re getting rain.

It’s one shovelful after another. I see similarities in my style of writing. I stay totally focused while enjoying the moment — digging one word after another as I work toward a bountiful end. And the more I do it, the better I get at it.

ABOUT THE PHOTO ABOVE: A selfie in my sunny garden.

A LINK TO MY BOOKS: Interested in my other growing project? Here is the link: Joan Livingston Books on Amazon

One thought on “The First Dig”