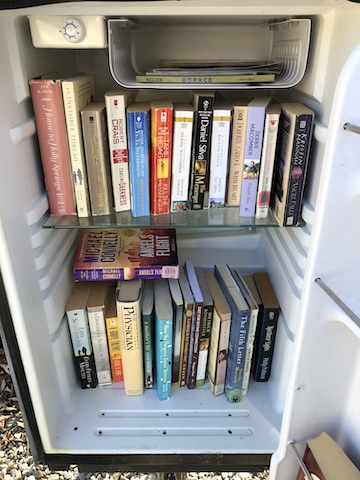 I saw the first so-called Free Little Library in the small city where I worked for a local newspaper. It was an attractive box, with plexiglass on the door that was held in place with a hook and eye, and raised on a post beside the sidewalk. I didn’t find a book I wanted for free but I was intrigued by the concept. Then my curiosity grew as I began finding these free book boxes in my village, and today, I got a lesson about 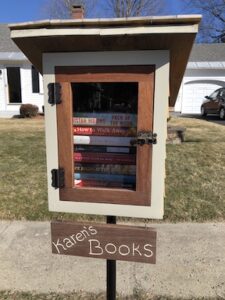 the rewards of sharing. (Stick until the end of this post for that.)

But before I go any further … if you are reading this on Saturday, March 26 and you are a Kindle reader, then you can get one of my books for free. Peace, Love, and You Know What is the first book I published.

Here’s a brief synopsis: Turn on, tune in, and then what? That’s the question facing Tim and Lenora. But first they’ll escape to a three-day graduation bash put on by Tim and his roommates at their funky, hippie pad. Peace, Love, and You Know What is a comedy framed by the Vietnam War and Watergate.

Now back to those free book boxes … I found the first in our village as I drove along a main street. I was curious enough to later walk out of my way to find it. Alas, there wasn’t anything inside I wanted to take.

But now that I’ve expanded my walks through the village, aiming for that magical 10K steps, I found five more free book boxes. One has a note advising donors to leave only newer books and in great condition. That’s where I found a first edition in like new condition of Colson Whitehead’s Underground Railroad, and the next day I returned with three newish books in gratitude.

The other day I explored a section of streets on my side of the village — Shelburne Falls is separated by the Deerfield River with the town of Shelburne on one side and Buckland, where I live, on the other. I was surprised to find two more. One was the traditional enclosed box on the
post. The other was what had to be the best use of a small refrigerator, which had a metal overhang 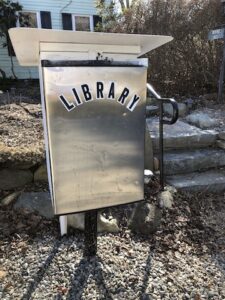 and was mounted on post. The outside said “LIBRARY” and the books were stacked neatly inside.

So far the Colson Whitehead is the only book I have scored but I haven’t given up looking for a read. I also see this as an opportunity to find a good home for the books I no longer want to keep or sell. (More on the selling in another post.) I’m talking about paperbacks and even hard covers that I’ve read and will never read again. I will give them to people who might want them.

And so, here is that interesting lesson that happened about an hour ago. Hank and I were walking home from having coffee in the lower village when we passed a woman reading in a chair outside a restaurant. She was ingrained in the book she held, even smiling and nodding. That’s when I recognized the paperback, Tony Hillerman’s The Great Taos Bank Robbery: And Other True Stories of the Southwest. It was one of the books I had left in a box the other day. I had bought the book or maybe it was given to me when I was the editor-in-chief of a newspaper in New Mexico.

I was glad to see by donating the book, I was contributing to someone’s reading enjoyment. Pass it on, I say.

ABOUT THE PHOTO ABOVE: That’s the inside to a small refrigerator cleverly converted into a free book box.

LINK TO MY BOOKS ON AMAZON: https://www.amazon.com/Joan-Livingston/e/B01E1HKIDG 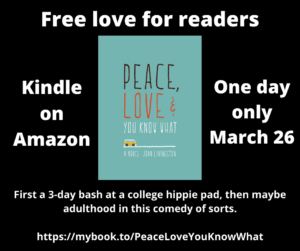 One thought on “Finding Free Books Wherever I Go”