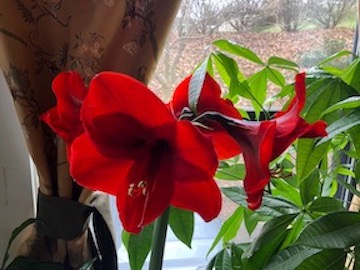 Well, I am actually past the middle of my next mystery as I write this post. So, let me back up a bit and tell you what I actually did when I reached that point for Following the Lead is no. six in my Isabel Long Mystery Series.

I aim for 500 words a day, and except for a day here or there when I wasn’t home, I’ve maintained that pace since I began in earnest early in February when I retired from journalism. Somehow it works for me although once in a while I surprise myself and hit a thousand.

So, reaching mid-way, I decided it was time to print out what I had written thus far and get out the red marker. At this point, I am a little hard on myself. Gee, didn’t I use that phrase somewhere else? Hey, I would expand this part more. Oops, I need to go back to an earlier chapter to fix some loose threads or revisit one of the earlier books to see if a “fact” (this is fiction after all) is correct. Surely, there’s another way to write this part.

Besides finding the usual typos and missing words, it’s an opportunity to immerse myself in the book’s story and its characters, especially as Isabel Long moves forward with her most recent case. But first, I make the corrections and additions on the computer’s document.

What is this case about? This one involves a baby taken fifty years ago and never found although the man who hires Isabel is convinced he met her once by chance.

Now, like Isabel Long, I will keep going until I reach the end.

ABOUT THE PHOTO ABOVE: This is the second year this amaryllis has bloomed. Its sister amaryllis is getting close to blooming — the fourth time including last summer.

LINKS TO MY BOOKS: Interested in the Isabel Long Mystery Series? I will make it easy for you to find it on Amazon: https://www.amazon.com/Joan-Livingston/e/B01E1HKIDG

One thought on “Now in the Middle”