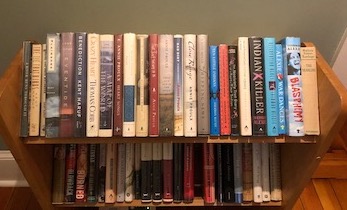 I don’t collect many things. Shells, sea glass, pine cones, and, likely the only thing of monetary value, first edition books. At least that’s what I am hoping as I go through my collection and decide what to keep or sell.

I got serious about collecting books well over twenty years ago. That’s when I started wanting to own the books written by the authors I loved. I believe Annie Proulx was the first.

But being a rather frugal person, I didn’t want to spend a lot of money, so I frequented second-hand bookstores on my lunch hour at the newspaper where I worked in Western Mass., and on occasion, yard sales. My obsession continued when we moved to Taos, New Mexico and back to Western Mass., where I now live.

In a few instances, I was able to get that book signed at a reading like my experience with Russell Banks. I was attending his reading at a literary festival for his then new book, The Darling. I had brought along my favorite, The Sweet Hereafter. I waited patiently in the auditorium while he signed other fans’ books. One of the organizers politely asked Banks to come sign books in the entrance area. He pointed toward me and said, “Yes, but she comes with me.”

For a while, I wanted to collect everything certain authors wrote. That’s when I took to book-selling websites. I only went for first editions and if the price was reasonable, signed. A few books arrived unexpectedly signed. That’s how I got my Sherman Alexie books.

The best bargains were in places that didn’t value books like second-hand stores that had a few bookcases off to the side. That’s where I scored first editions of the Harry Potter series in like new condition for a buck a piece. I got a vintage “Invisible Man” by Ralph Ellison at a Habitat for Humanity Store.

Then, there were the so-called free tables in places where I worked. I got a book by Hemingway that way one time.

If I find an author I admire or a book I treasure, I will try to buy up others. Sometimes I’ve been disappointed that a certain quality hasn’t been maintained. Or they really only had one great book in them, like Harper Lee.

I don’t own an immense amount of books, a couple hundred or more, but then we’ve moved 2,400 miles twice in the past sixteen years. As the mover said, the weight on those adds up.

But I’ve reached the conclusion, it is time to part with most of my books. I have read them all and most I won’t read again. I honestly don’t feel I need to hold onto them and after doing research, I realize that I can make some money. My plan is to sell them online.

So for the past few days, I’ve been going through my books and doing research online. Any book that has nominal value has been passed onto one of the free little libraries in town, which is actually a small minority of the collection. I have been compiling info for each, assessing their condition, and researching what they would fetch on a site I’ve used many times. Many, I have found, have greatly exceeded the amount I paid for them. That’s good news.

However, there are books that are too near and dear to me to sell. I will write about them in another post. And then there are those books written by my author friends. Those, too, are keepers.

One of the amusing parts of this exercise is finding bookmarks with names of the stores that sold them. Many don’t even exist. I am holding onto them as well.

As far as selling, I have a ways to go, but I will make an announcement here and elsewhere when I do.

3 thoughts on “Letting Go of Books”