It was my friend, Victor who gave me the idea to have someone die at a demotion derby in one of my books. His suggestion was that a body would be found after the event ended and the crowd cleared. He mentioned this after I had actually attended a derby at a country fair a few years ago. Me a derby fan? Hardly. But I saw it as an opportunity, like I did as a reporter a long time ago, to soak in the local color.

The idea for a death at a derby stuck with me as I went onto writing other books in my Isabel Long Mystery Series. And when it was time to start no. 5 Working the Beat, I took another approach. Unless the person died quietly of a heart attack or a drug overdose, it was unlikely that nobody 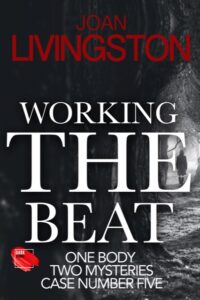 would have noticed in that crowd of people. It had to happen another way and be tied to some sort of crime. So, that’s what I developed. Lucas Page’s body was found the next day and allegedly nobody saw how it ended up in a ravine.

His death is why his grandmother approaches Isabel Long at the Titus Country Fair. And good timing because the fair’s demolition derby is being held that night. Isabel was already planning to go with Jack, the owner of the Rooster Bar where she works parttime and her love interest. He’s even closing his bar on a Saturday night because of it.

I had fun writing about a demolition derby in a chapter called “Smashin’ and Crashin’.” For that chapter, I used my experience being at one and a little online research — plenty of videos on YouTube I might add.

Plus I throw in the rivalry between two characters in the series: Annette Waters and Gary Beaumont. Annette aka the Tough Cookie is a mechanic who runs a garage and junkyard. She hired Isabel in Redneck’s Revenge to prove her father’s death wasn’t an accident, that he was too drunk to get out of his burning shack of a home. Gary, a bad boy drug dealer who was a suspect in the same book, hired her in the third, Checking the Traps. I love these characters too much to let them go, especially since there’s a history between the two.

The demolition derby in Working the Beat is an opportunity for an interesting showdown.

So I gave Annette’s car the name Wild Woman. Gary’s is Bad Ol’ Boys because initially his brother, Larry was going to drive.

In this clip, Isabel is sitting on a blanket on a hill with Jack’s buddies, many of them customers at the Rooster, and his cousin, Fred aka el Creepo. I let them explain to Isabel, who is not a local gal, how it works like why the cars drive backwards — so their radiators don’t get hit. As it turns out, Gary wins the first heat, and Annette is in the third. Here goes:

In the third heat, I keep my eyes on Annette’s Crown Vic. Yes, Wild Woman is in action. I pick up the binoculars to check out the Tough Cookie’s face, what I can barely see beneath her helmet. She has a fierce grin as the rear of her car wallops the front end of any vehicle close by. Flags are going up on her victim’s cars. This woman wants to win, and I bet meeting Gary Beaumont in the finale must be an inspiration. Just a reminder that Gary is the father of Annette’s son, Abe, although he and most of the world don’t know that. Ma and I do. It was one of those brief high school hookups. “Could you imagine what that’d be like?” she once told me. “Having a father who’s a drug dealer? No thanks. He’s better off without him.” So, Annette in Tough Cookie fashion decided to bring him up alone.

“Damn, that woman sure can drive.” Jack gives me a squeeze. “Maybe Annette should give you some lessons, Isabel.”

But Jack is right about Annette’s driving skills, and she finishes off the last car left. Bam, its engine is still running, but that car is going nowhere. The crowd goes berserk. The True Blue Regulars are on their feet and hollering around me.

I nudge Fred, who just sits there.

“Hey, you used to be married to her. Why aren’t you cheering with the guys?”

He grins and nudges me back.

“You would say somethin’ like that, Isabel. Maybe cause I used to be married to her.”

The crowd’s noise has died down. People are up and stretching as the wrecks get towed from the field and the crew checks for broken parts on the ground. Jack’s left to use one of the porta-johns or maybe go in the woods if the line is too long. So, it’s just me and el Creepo. So far, I haven’t come up with a better nickname for Fred.

“As long as it’s not about Annette.”

I shake my head.

“No, it’s about Lucas Page, the kid who died here after the demolition derby. You remember him?”

“How could I forget.” He points to a certain section of the woods behind us. “They found his body over there.”

“Sometimes I’d see him on a job or around. Couldn’t miss him with that red hair of his. Why do you ask?”

“His grandmother wants me to look into his death.”

“Shirley? What the hell for?”

“She thinks it wasn’t an accident.”

“Tell me, Isabel. Do all your cases involve somebody’s death?”

Jack is back just in time for the three remaining cars to enter the pit: Wild Woman, Bad Ol’ Boys, and Road Hog, the winner in the second heat. Each driver gets a cheer from the crowd, who I bet is anticipating a good showdown in the finale.

“Who are you rootin’ for, Isabel,” Jack says with a chuckle.

And with a blast of that airhorn, the cars start moving. It’s clear Annette and Gary plan to take out Road Hog right away as they circle the car. They want to go head to head, or in this case, rear end to rear end of their vehicles. As I expected, Road Hog is a goner about ten minutes into the heat. Now, the driver is stuck in the middle of the pit, watching as Wild Woman and Bad Ol’ Boys circle him. His car is off limits now that he’s hoisted the surrender flag, but he has the best view of anyone about what’s happening down there. Round and round the two cars go. Both are driving backwards really fast, something I could never do, Jack reminds me. Annette tries to take out a rear tire on Gary’s vehicle, but he speeds away in time.

“That was a close one,” the announcer says. “Bad Ol’ Boys better watch out for Wild Woman it they know what’s good for ’em.”

It was a close call, and now the two of them play cat and mouse, nicking each other’s cars although not enough to do either of them in. But then, both cars spin around and speed toward each other. Many in the crowd rise to their feet as if that would get them closer to the action.

And, then, wham-bam-thank-you-ma’am, Wild Woman and Bad Ol’ Boys hit each other head on, and from the impact, it’s clear that’s the end of the road for both vehicles. The crowd goes nuts. I get to my feet and join them.

“Not a bad way to finish,” he says. “I wonder if they planned it that way.”

ABOUT THE PHOTO ABOVE: A scene from the demolition derby I attended at the Cummington Fair a few years back.

INFO ABOUT WORKING THE BEAT: My book, no. 5 in the Isabel Long Mystery Series, will be released on Jan. 27. Kindle readers can pre-order now. I will let you know when the paperback version will be released by my publisher darkstroke books.

Here is the link on Amazon: mybook.to/workingthebeat

And as a bonus see the video I created below.

One thought on “Smashin’ and Crashin’ in Working the Beat”