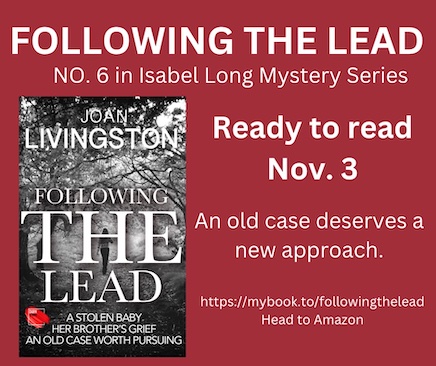 Today’s the day, Nov. 3, for Following the Lead — the next book in my Isabel Long Mystery Series. Readers who have been following Isabel for five cases can now join her for the sixth.

I decided to throw Isabel into a really challenging case this time. After all, it’s been almost a year since she started her first in Chasing the Case. That’s when she decided to find out what happened to a woman who disappeared 28 years ago. Both women lived in the same town and the disappearance was Isabel’s first big story as a rookie reporter. Since then she’s investigated the deaths of a junkyard owner, a poetry-writing highway worker, the owner of a small town newspaper, and the beloved grandson of a poor, distraught woman.

But this case is different. It involves a baby who was abducted 50 years ago and never found. Lin Pierce, Isabel’s former boss, was just a boy when that happened as his mother was giving a music lesson in their home. He believes he might have met his sister. The woman did look a lot like his mother and shared a distinctive family feature — different colored eyes.

Now, Isabel isn’t going to let something like 50 years stop her from taking this case. Besides, she has her mother Maria, who is 93, to help her.

Of course, I make sure Isabel encounters danger actually from two sources. But I will let you read about that. Does she find Lin’s sister? Mum’s the word.

When I wrote Chasing the Case, I didn’t anticipate I would create a series. But I got easily hooked by the mystery genre. And frankly, the positive feedback I’ve received has been so encouraging — so thank you readers. I love reading a good series. I like even better creating one. This is the second book in the series released this year. And, yes, I’ve begun the next. You’ll be hearing more about it in the future.

Also a series enables me to hold onto my characters, good and bad, who are very real to me. I used to be a big day dreamer. Now I put those skills to use writing.

In writing this series, I was mindful that I wanted each to stand on its own in case it was the first book a reader picked up. So, I don’t do much rehashing from the previous books although I do include hints and coded references. I try to develop each character and their description as if this was on the only book I wrote.

The same goes for those readers who have been following the series. I want these readers to feel like insiders.

I hope you will enjoy reading Following the Lead as much as I did writing it.

LINK: Following the Lead is now available on Kindle. Soon it will be in paperback. Here’s the link to Amazon: https://mybook.to/followingthelead