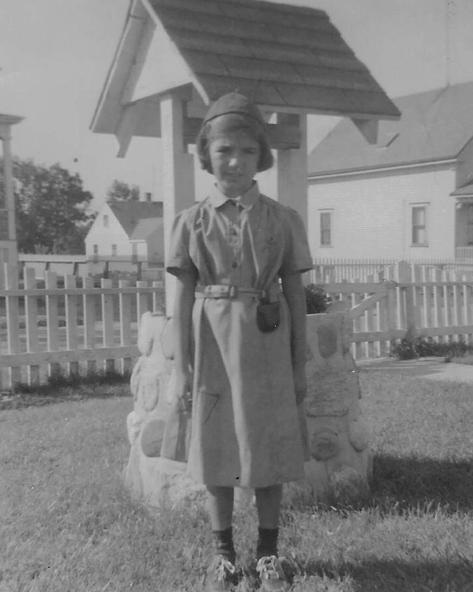 I don’t have many regrets in my life. I can think of a few things I’ve thrown away I wish I still owned, but no biggies there. There’s some stupid stuff I’ve said. I will admit, also, to mistakes I’ve made with relationships. The one experience that bugs me, likely prompted by the news these days, happened when I was a child.

I was eight or nine, perhaps, and a Brownie Scout. That’s a picture of me above, looking awfully skinny in my uniform. One year, I found out I could go to a day camp for free if I sold enough Girl Scout cookies. My enthusiastic parents, especially my Dad, went into full gear, hitting up the people they knew. They sold enough, so I could go.

It was my first experience away from home and school. I didn’t know any of the girls, but as the week went on, I got close to one. I will also note she was Black, which shouldn’t make any difference, but it does later in this story. We did the activities and ate lunch together. We acted like the silly, little girls we were.

Later that summer, I was with my mother and sisters shopping in downtown New Bedford — a lively strip then of department and other stores during those pre-mall days. We were walking along the sidewalk when I spotted my camper friend and her mother.

I remember the girl was happy when she recognized me. But what did I do? I passed by and pretended I didn’t know her. I recall distinctly she asked her mother why I didn’t say hello. I didn’t hear her response.

Yes, I was a shy girl then. (That might surprise some folks who know me now, but I worked on it.) I lived a sheltered life in a small town. Also, being fully Portuguese, I am more brown than white. It was the fifties. But still… I ponder today what stopped me then from doing what should have been a natural thing.

Compared to what is happening now, my snub may seem rather small. But I believe it’s one of those lessons I had as a kid that has helped shape me as an adult. When it comes to my fellow human beings, I try to look for common denominators. I want to know about our different experiences. Certainly, living in big cities, small towns, and in multicultural Northern New Mexico has given me numerous opportunities.

But when it comes to that little girl, I honestly wish for a do-over, but sadly that’s not possible. Lesson learned.