Well, not really, but ice cream was a big deal for me growing up. It certainly was for my Dad, and since today is Father’s Day I will share that story with you. It all came back to me when Hank and I went for takeout ice cream today. 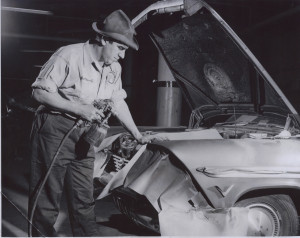 Dad, as a young man, working on a car.

My Dad, the late Antone Medeiros, grew up in a very large family, the child of immigrants from Portugal’s Azores Islands. I don’t imagine there were many opportunities to have ice cream, I wonder if ever.

During my childhood, we rarely ate out, perhaps fish and chips on a Friday. Dad did his best to support his family as an auto body man for a Ford dealership. I don’t recall going to a sit-down restaurant until I was a teenager. But going out for ice cream was a post-softball ritual.

Dad coached the Livesey Club’s men’s softball team in what I believe was a slow-pitch league. He was even a pitcher. He also managed the league. (As an aside, I started doing write-ups on the weekly stats for my Dad, and even dropping them off at the sports desk at the New Bedford Standard Times while he waited in the car. I believe that’s how I got the journalism bug.)

But back to ice cream. My siblings and I would hang out in the playground and/or watch the youngest while my Dad’s team played and our mother, Algerina kept score. We tried to be on our best behavior because afterward we would go out for ice cream. In the car we would sing: “I scream, you scream, we all scream for ice cream.”

Now, my Dad, being an ice cream lover, wanted to get the most for his money. We would travel all over the area searching for whoever served the biggest cone. Sometimes he got a lead that someone he knew, likely a teenager, would be working at an ice cream stand, guaranteeing a really large cone, until that person no longer worked there.

We ate soft serve (including when they started dipping the cones in chocolate) and hard — as long as it was ice cream.

My Dad was almost 93 when he left us nearly five years ago. There is so much more I could tell you about what a great guy he was, but now this is one part of him.

So, today I got two scoops: strawberry and maple walnut, one of his faves. Here’s to you Dad!

MY BOOK: Killing the Story, the fourth book in the Isabel Long Mystery Series, which will launch Sept. 26 is now available on pre-order (Kindle right now). Thanks to all who placed their order. Here’s the link: https://mybook.to/KillingtheStory

2 thoughts on “We All Scream for Ice Cream”