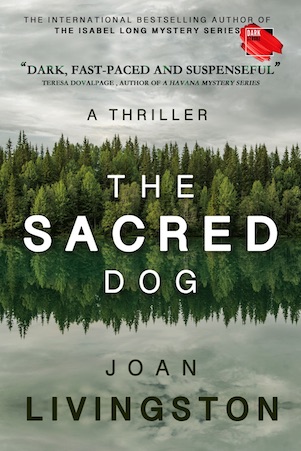 Okay, it’s official: Pre-ordering begins for my next novel, The Sacred Dog. Its release is Dec. 27 for Kindle — paperback will follow.

This is my third book published this year. First, Working the Beat, no. 5 in the Isabel Long Mystery Series, was released in late January. No. 6, Following the Lead, has a Nov. 3 release by my publisher darkstroke books.

The Sacred Dog is not part of that mystery series although it takes place in my favorite setting: the hilltowns of Western Massachusetts. Yes, there is a bar and a slew of country characters that came out of my head. This is a story about an ugly feud between two men that leads to a dramatic climax. I also throw a big secret that involves both men into that personal conflict.

I will be sharing a whole lot more in future posts. So, I’ll start with the book’s title.

The Sacred Dog is the name of a bar owned by one of the lead characters, Frank Hooker, and where a great deal of the book’s action takes place. The bar’s name was inspired by a black Labrador retriever Frank, who lives alone in a trailer beside the bar, found wandering around its trashcans. The dog was probably dumped because she was bone-skinny and had no collar. So, Frank decides to keep her. Her spot is typically behind the counter when the bar is open.

Here’s a scene in which Frank plays cards with his best buddy, Early Stevens that reveals more.

Frank decided on the spot to save her. It’d been a while since he had a dog, and he took to calling her Louise after a girl he once knew who bore the same mournful expression. He fed her as much as she wanted and within a few weeks, she became eternally grateful. One slow night, when Frank and Early played cribbage, Louise nudged the topside of her head beneath Frank’s hand. After a while, he told her to “git,” and although the dog was clearly disappointed, she left him alone while he played and talked with Early.

“You know, Early. That dog is a saint, a pure saint. She never complains, even when those kids come in Sunday night to bother her. Look at ’er. The way she sets there, you’d think she was something sacred.” He paused while he studied the fan of cards in his hand. “Yeah, that’s what she is. Louise is the sacred dog.”

“Oh, shit, Frank, you’ve gone off your rocker. Dogs aren’t sacred. They shit where you go. They eat shit and roll in shit.”

“Frank, why don’t you shut the heck up and git me another beer.”

What had been a pet owner’s moment of tenderness became an inspiration for Frank. A few weeks later, he decided to officially change the name of his bar, which was still Ronnie’s, to The Sacred Dog. Truthfully, he was thinking about getting a new name when it dawned on him it was rather foolish to have a bar named for his ex-wife. He discounted using his own name or anything with the word Holden in it. The town had enough buildings named after Holden, the town’s founder. Early suggested the Bowtie, but Frank said no one ever wore one in his bar and he expected no one ever would.

The Sacred Dog suited Frank fine, so he asked a lawyer in town to draw up the papers to make it legal. Then, he asked Early to make the sign. The regulars thought Frank was joking, but then he told them the story and they agreed it was a good name for a bar. Some stiffs in the back room of the general store did grumble to Frank about it. The pastor of the Holden Congregational Church called to complain, but Frank, who had only been to church as an adult for funerals and his own wedding, said he didn’t see the connection.

But Louise is more than a beloved pet. She plays a key role much later in this book.

Actually, my inspiration for the bar’s name came from a real dog, a black Labrador retriever who came with the name Sheena. One day, she showed up in our yard. Her owners, neighbors, had moved and left her tied. I called the man to see if they still wanted the dog, but he said no. When he brought her dish and leash, Sheena didn’t even give the man a glance. I don’t blame her.

Sheena knew her name, and though it was never one we would have chosen, we let her keep it. She came at a time when our home was lively with lots of young kids. Even at their noisiest moments, she would lie there, watching the action and looking regal. That’s when I called her The Sacred Dog. I remember fondly at the years she spent with us.

LINKS: Here’s the link to order your copy: https://mybook.to/thesacreddog. I am appreciative if you do because it helps with ratings.

And here’s a link for a previous post introducing this book: https://www.joanlivingston.net/hilltowns/up-next-the-sacred-dog/