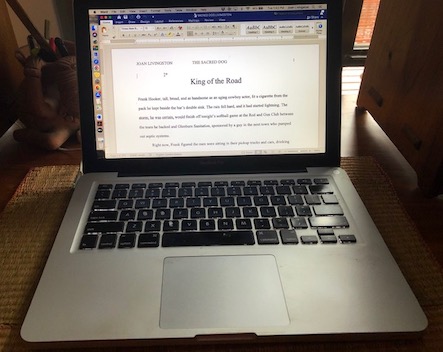 I am pleased to report that my publisher, darkstroke books, has agreed to take on my novel The Sacred Dog. This book isn’t part of my Isabel Long Mystery Series. But it has one of my favorite settings — the hilltowns of Western Massachusetts.

The official release is Dec. 27, and darkstroke will make the formal announcement when the Kindle version is ready to pre-order. But let me tell you a little about The Sacred Dog.

The Sacred Dog is the first book I completed at the start of the millennium. We were living then in Worthington, one of the hilltowns of Western Massachusetts. At that time I was immersed in the area, editing stories for the daily newspaper where I worked. Before that, I was the hill town reporter. Plus our family was involved in the town. So, I had lots of inspiration there.

I was able to sign on with an agent, Dan Green of Pom Inc., who tried his darndest to sell it to a publishing house. This was long before digital books and writers had easy access to self-publish. But it didn’t work out and I’ve held onto the book since then. Once in a great while, I’d print it out and get out the red pen, or edit it on the screen. Now, I am happy it will be available to readers.

The story is basically about bad blood between two men — Frank Hooker and Al Kitchen — and that feud’s ultimate climax. Frank Hooker owns The Sacred Dog, the only bar in town, where the locals gather to drink beer, gab, and get away from their families. The only person not welcome is Al Kitchen, but Frank has his reason — he blames him for his brother, Wes’s death. But after an appeal from the grandmother who raised him, Al is allowed to have two beers. Frank figures it’s better to keep his eye on someone he doesn’t trust or like.

Al Kitchen is a hell raiser, no surprise considering the grandfather who raised him was a drunk and an abuser. About the only good thing the man did was teach him to hit a baseball well. But Al always has his kerosene-smelling granny on his side even as an adult. Al was in the car crash that killed his best buddy, Wes, but he wasn’t at the wheel — a fact Frank won’t accept.

Frank’s life is about to change now that his ex-wife and their daughter have returned after living in Florida for three years. Verona says she misses her old life although coming back might mean facing a dark secret that involves both men.

All is about to come to a reckoning.

I certainly will be writing in the future more about the characters, setting, and why the bar is called The Sacred Dog.

So sit tight. Besides, I have another book coming out — Following the Lead, No. 6 in my Isabel Long Mystery Series. It has a Nov. 3 release but you can pre-order now, which is helpful to authors. And thank you if you already have. Here is the link: https://mybook.to/followingthelead

ABOUT THE PHOTO ABOVE: That’s the opening page. The chapter is called King of the Road, a favorite tune among the drinkers at The Dog, as they call it.