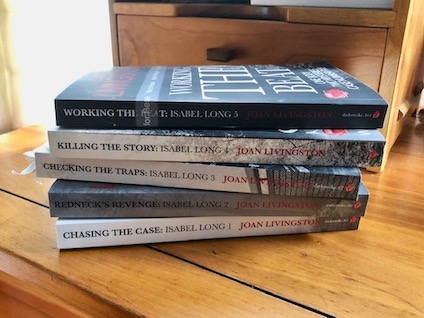 Following the Lead, no. 6 in my Isabel Long Mystery Series, is in the works for a Nov. 3 release and available for pre-order. But before I started no. 7, I was inspired to take a pause and reread each book. I had the time and motivation to maintain the series’ consistency.

So, as I sat on the front porch, my alternate office these warm weather days, I went through each one, as a reader and not as the writer. Chasing the Case. Redneck’s Revenge. Checking the Traps. Killing the Story. Working the Beat.

Frankly, key to this series is Isabel Long who makes it easy for me to create and continue a series since she tells the story. A widow a year. A former long-time journalist who plans to put that profession’s transferable skills to good use investigating cold cases in the sticks where she lives. A part-time bartender. She’s not some sweet young thing. Smart, savvy, and a bit of a wise-ass, especially about her observations of hilltown life. I admit there’s a lot of me in this character, save the widow part.

As I have mentioned before there are characters I love too much to let go. Annette Waters aka Tough Cookie is one. She runs a junkyard, garage, and co-owner of a convenience store in the middle of nowhere called the Pit Stop. The Old Farts, those nosy geezers who meet in the backroom of the Conwell General Store, are others. Of course, there’s Maria, Isabel’s mother and sidekick, plus Jack, her love interest that owns the Rooster Bar. Bad boys Gary and Larry Beaumont. Marsha. Annette’s son, Abe. Isabel’s old boss, Lin Pierce. Dancin’ Dave Baxter. And Jim Hawthorne aka Thorny.

Some characters I create don’t appear in every book. Others are one and done.

But as I move onto the seventh, I’ve decided to draw up a chart of who’s who for each character, so I keep them and details about their backgrounds straight — also key moments for them.

The same will go for each town. Isabel lives in Conwell, which has one store, one bar, one school, one school and one stoplight. Dillard, from book four, is the only one with a railroad passing through it. Titus has a country fair. Caulfield has the Pit Stop and Baxter’s, a biker bar on the lake. There are rivers and landmarks.

I have to say rereading the books has been an enjoyable pastime. I even found myself laughing out loud at some of the parts. I liked the flow and interaction of characters. I am happy I wrote them. I am glad I worked with editor, Miriam Drori.

And since I had an idea for no. 7, I marked pages with pieces of paper for info I will want to include.

Okay, full disclosure: I also found a few errors, which in this digital age and print on demand can be changed — certainly part of my inspiration for the chart. A couple of readers mentioned after reading Checking the Traps, I had Isabel giggle too much. I believe I used that form of laughter to show Isabel was a little unsure as she finds later in life a new love in Jack and situation as a P.I. But I see what they mean. Isabel is tougher than that, and I stopped her giggling from book four on.

But with only the fifth book to go, I couldn’t help myself. I’ve started no. 7, tentatively called Making a Deadline. On Friday, I sat down with my computer, and the story just began itself. Remember Cary Moore, the highway worker who wrote poetry good enough for a famous poet to steal? Well, thanks to that remorseful poet, Cyrus Nilsson aka the Big Shot Poet, his collection, “Country Boy,” is having a release party at the Penfield Town Hall. It’s standing room only for local folks. And that’s where Isabel — and her mother — find the next case. My lips are sealed for now.

PHOTO ABOVE: That’s the stack of books for the Isabel Long Mystery Series.

LINKS TO MY BOOKS: If you are reader, thank you very much. If you are tempted to be one, here’s the link to the series: https://www.amazon.com/Joan-Livingston/e/B01E1HKIDG

And if you are interested in pre-ordering Following the Lead — againthank you — here’s that link: https://mybook.to/followingthelead That’s for Kindle orders. Paperback will be released a little later.