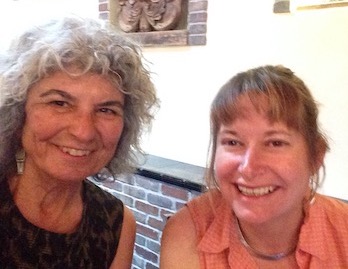 Teresa Dovalpage is the next author to appear in this 6Ws series. I do have a confession to make. Not only is Teresa a talented writer in English and Spanish, she is one of my dearest friends. As you can read from her answers, she is a lot of fun.

Her latest book is Death Comes in through the Kitchen, published by Soho Crime.

It is a mystery set in Cuba, her country of origin, which puts an interesting twist on the story. And for foodies there are recipes for great Cuban dishes.

Who is author Teresa Dovalpage?

A Cuban transplant to New Mexico. A quirky chica. A novelist and a college professor at NMJC.

What does she write?

Un poquito de todo! A little bit of everything but mostly fiction: novels, short stories and a couple of theater plays. I also write for The Taos News. For over eight years I did business and lifestyle stories, which were super fun. I am now writing a series of bilingual novellas.

When does she write?

At night, always. I am a night owl. My best inspiration comes after ten p.m. Qué weirdo, no? And then I need a steak before I can go to sleep.

How does she write?

I used to have just a general idea in my cabeza, a not too well-defined roadmap that was subject to change. But since I started writing mysteries I have developed a healthy respect for a better planned plot. It makes writing easier. I am now reading Mastering Suspense, Structure, and Plot: How to Write Gripping Stories That Keep Readers on the Edge of Their Seats by Jane Cleland, who I just met at the Cozycon, and I am learning a lot about about techniques, settings, subplots and more.

Where does she write?

At home. I now have an office. I used to have the computer in my bedroom but I have found out that keeping a sleep/ work separation is worthwhile. I fall sleep faster, maybe because my characters are trapped in a different room.

Why does she write?

For fun. I started writing when I was a teenager and haven’t been able to stop. At first, I didn’t have any idea of what I was doing… not sure that has changed a lot. But I’ve been an avid reader since childhood so writing felt like a natural step.

About her recent book:

Death Comes in through the Kitchen (Soho Crime, 2018) is available at Amazon and bookstores. Matt, a San Diego journalist, travels to Havana carrying a wedding dress for Yarmila, his Cuban fiancée. But he finds her dead in her bathtub. Later he starts to wonder: Who was that woman he thought he knew? And who killed her? It’s also a Havana travelogue, with descriptions of paladares (small private restaurants), casas particulares (inns), and the bright colored fifties cars known as almendrones. The book contains authentic Cuban recipes.

In English: A Girl like Che Guevara (Soho Press, 2004); Habanera, a Portrait of a Cuban Family (Floricanto Press, 2010); and The Astral Plane, Stories of Cuba, the Southwest and Beyond (University of New Orleans Press, 2012).