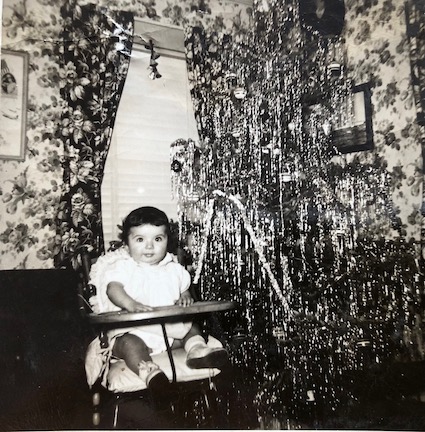 The first Christmas I actually remember happened when I was a kid too young to go to Midnight Mass. My grandfather, Manny stayed home to babysit my cousins and me while our extended family walked to the church down the street.

Vovô, as I called him, was my father’s father and not one of those playful grandfathers. I just remember him opening a bottle of red wine and consuming it while we waited for the family’s return. He had the radio on, probably the Portuguese station that he loved. Having immigrated from the Azores, he thought the Portuguese singers were the best and he would try to demonstrate that by serenading me. Anyway, we kids were safe with Vovô until Mass was over and the gift exchange began.

Most of my Christmases as a child involved visiting. My parents, especially my father, were very sociable people although they never held parties at our home. The one exception was Christmas Eve when people would make the rounds. Most my father knew through the local athletic club. It was the only time alcohol was served in our home. I remember as a kid waiting to see if anyone would show up. That tradition faded out.

Another was going to people’s homes late at night and singing outside their doors until we were let inside. They were expected to feed the group of singers and I presume offer drink. We sleepy little kids went along. But that ended after a few years.

Yes, we received gifts from Santa until we realized he didn’t exist. I learned that when I happened to be in the attic and found unwrapped gifts intended for my younger sister.

We became full-time visitors on Christmas. For years, we had an early dinner with our grandmother Angela, who came to this country from the Portuguese island of Madeira when she was just a teenager. Her food had a rather foreign flavor. My sister and I said she must use a secret spice. Then we visited our aunt and uncle next door — their sons were childhood friends we saw every weekend. They were on my mother’s side. Then we were onto my father’s side, visiting the homes of his sisters. I can’t remember why, but one home we called Devil’s Island.

As for presents, we didn’t get a lot, understandably for the time. I recall when I was 12 being asked by my mother what I wanted. I honestly didn’t know but I pointed at a large doll dressed in a taffeta gown. I was well past the stage of playing with dolls but it seems I wasn’t ready to let my childhood go.

Over the many years, I have had a variety of Christmases, including a few awkward ones. Of course, that can happen because the holiday involves real life.

There were many times when we lived in Taos, New Mexico that it was just Hank and I, which was fine. We gave up having a tree and pared down our gift-giving. But we got to enjoy what that area has to offer for the holidays, including spending Christmas Eve watching the bonfires at Taos Pueblo and then having a drink at the Taos Inn. Sometimes family came to experience it.

Now that we have returned to New England, we spend the holiday with our children, granddaughters, and the extended family. Fun times for sure. I wish the same for you.

ABOUT THE PHOTO ABOVE: That’s a chubby me only eight months old at my grandparents’ home where I lived with my parents for the first few years of my life. 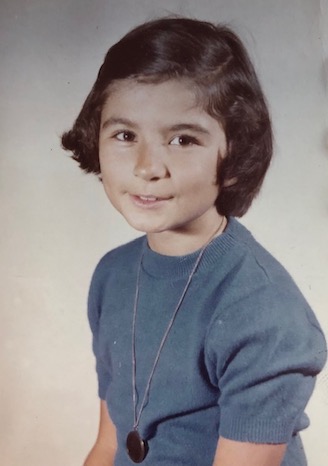 First a brief note: I was thrilled yesterday to hear from my publisher darkstroke books that about 1.2 million pages have been read from my Isabel Long Mystery Series since the start of 2022. Thanks Kindle readers for your interest and support.

I was a kid who loved learning. I still can remember the delight I felt when I discovered I could combine letters to make words and words to make sentences as I learned to read. But that feeling was magnified when I learned I could create what others could read. Writing was magic.

I have to give credit to three teachers — one’s actually a professor — who truly inspired me to take writing to another level, that it would become my form of creative expression. Let me tell you about Irma Darwin, Donald Graves, and Robert Rose. Mrs. Darwin and Mr. Graves have passed on; I am unaware what happened to Prof. Rose after he left Bridgewater State College, as it was called then. I note them in my acknowledgments for Following the Lead, no. 6 in my Isabel Long Mystery Series.

Mrs. Darwin was my fourth-grade teacher at Oxford School in North Fairhaven, where I grew up. We students worked hard at making perfectly round letters in cursive — although journalism ruined that objective. She read aloud A. A. Milne’s Winnie the Pooh series and taught us about world explorers.

And Mrs. Darwin gave me the freedom to write on my own, making up short stories and one-act plays. I assigned parts to my classmates and we practiced at recess. Later, Mrs. Darwin let us perform in front of the classroom. I don’t remember what I wrote, but I do the feeling of using words to tell a story.

In fifth grade, I was able to take my writing to another level when I had Mr. Graves as a teacher. That year, a few students from each of our town’s several elementary schools attended an enrichment program on Wednesday afternoons. I, luckily, was one of them.

We were taught advanced science and creative writing. I bet you can guess which class inspired me. Mr. Graves used prompts to teach us about similes, metaphors and other figures of speech. Here was a deeper way to express myself in writing. He compiled what my classmates and I wrote in a mimeographed pamphlet, which I still have.  Here is a piece I wrote called The Tornado. It’s a little over the top, but keep in mind, I was in fifth grade. I recall Mr. Graves called my parents to tell them about it.

The winds of torment strike the grey sky with evil destructive movements. Its path tears the world apart with its wind. The sun struggles to set the sky afire with its golden sunshine, but is shoved aside to hide with the clouds. Trees sweep the winds hoping for mercy. The sea of grass bows at the sight of this evil destruction. Fields of corn are whipped and left to die for they would not bow and worship him. Mountain tops are bitten off piece by pieces until it too will follow with the others and bow to worship, but the proud mountains stand tall as ever in trying to hold back the winds. The winds of evil torment goes on to finish his evil scheme.

Mr. Graves continued his work teaching children about writing at the Writing Process Library at UNH. He wrote 26 books, nearly all about teaching writing. Here’s the link: https://www.amazon.com/Donald-H-Graves/e/B001IODHK2? I feel fortunate that we connected many years ago via email so I could thank him personally.

After fifth grade, I had to wait until I went to college to find inspiration again. As a freshman at Bridgewater, I had Robert A. Rose as an instructor for English 101 and then the next year for Creative Writing. Besides exposing us to the counterculture, he gave me a piece of advice that has become my mantra: “Write like no one else has ever written it before.” To me that meant being original and authentic, and I thank him for instilling that in me.

Here’s a poem I wrote then called cause and effect. It was obviously written after one of my failed love affairs.

has moved me to a self-hate

for the days of headless queens

Certainly, I have had other memorable teachers and professors but these are the top three in my book. Thank you.

LINKS: Here’s the link to my books on Amazon, including Following the Lead, which will be released Nov. 3. Pre-orders are available. Thank you if you do. https://www.amazon.com/Joan-Livingston/e/B01E1HKIDG

ABOUT THE PHOTO ABOVE: Yes, that’s a photo of me, likely in fifth or sixth grade.