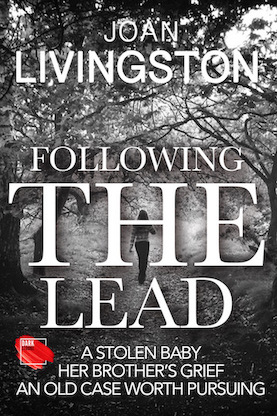 Well, it’s big news to me, and I hope the readers of my Isabel Long Mystery Series, that Following the Lead, No. 6 has a Nov. 3 release date.

Starting now, Kindle readers can pre-order their copy and it will magically appear in their device on that date. More below on the logistics, but here is a link to get you started: https://amzn.to/3cs6FCh

So, what is Following the Lead about? Isabel has moved from one case to the next rather fast. If you read No. 5 to the end, you understand. No worries if you haven’t or are new to the series. Each book can stand alone.

Lin Pierce, Isabel’s former boss, wants her to go way back into the past to solve a family mystery. When he was a boy, his baby sister was abducted from their family’s front yard. Lin was supposed to be minding his sister while their mother was giving a piano lesson inside their home, but he was distracted in a carefully orchestrated kidnapping. That was 49 years ago and the family has never gotten over it.

Lin is convinced he met his sister when they were adults. After all, the woman looked a lot like his mother at that age, and she had a distinguishing family trait — different colored eyes.

As Isabel pursues this case, she zeros in on the student, now a well-known musician, who was being given a lesson that day. She’s having a difficult time getting to speak with him, but, of course, that’s not going to stop her.

Besides Lin, Following the Lead has many of the characters, good and bad, I love too much to let go. The might be yours as well, like Annette, Marsha, Gary and Larry Beaumont, the Old Farts, and, of course, Isabel’s sidekick, her mother Maria, and Jack. But a new case means new characters. Over the next weeks, I will be writing posts to hopefully inspire you to get my book.

Now about those logistics … pre-orders on Amazon help to bring the book attention via ratings. So thank you if you do. As for paperback, that version won’t be ready for a little while after the Kindle launch — the policy of my publisher.

And in case you’re wondering, I’m already thinking about the No. 7. I’m having too much fun to let this series go.

IMAGE ABOVE: Check out the great cover Laurence Patterson of darkstroke books, my publisher, created. Yes, that’s Isabel Long following a trail as she solves a very old mystery.

LINKS TO MY OTHER BOOKS: While you are waiting for No. 6, you might like to catch up with the other books if you haven’t already done that. Here’s the link: https://www.amazon.com/Joan-Livingston/e/B01E1HKIDG