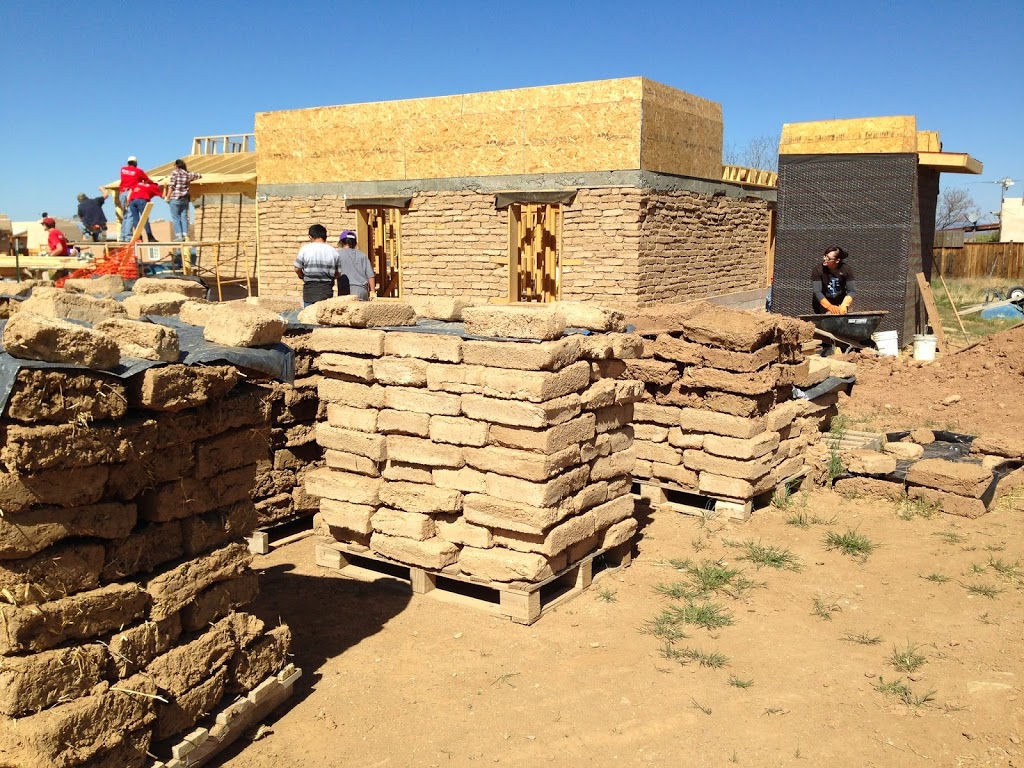 Saturday morning I joined a crew of mostly women to help build an adobe house for Habitat for Humanity of Taos. Actually, we were building it for a single mom and her two children so they could have their own home.


The home’s exterior walls of adobe brick were up. The interior walls were framed. The crew, led by a supervisor, worked on the parapets and the roof for the porch, sanded and sealed boards, and made adobe bricks for the next house to be constructed. It was part of Habitat’s Women Build Week.

Habitat uses adobe brick in Taos rather than stick framing because the materials are cheap and the labor by volunteers is free.

And so I was there with other women, using a hoe to mix the right proportion of materials in a wheelbarrow — water, clay-rich dirt, sand, and straw. I worked with the homeowner’s sister to get the right consistency, pushing and pulling the hoe together as the adobe began to thicken. Sometimes we had to add more dirt.

I decided quickly there was nothing romantic about making adobe bricks. It’s tough work and out loud I admired the people long ago who created homes and villages from the materials at hand.

Using gloved hands, we scooped the adobe into wooden frames on the ground. We pressed it down so there would be solid blocks

when the frames were eventually pulled and the bricks were allowed to dry in the sun.

When we used up the available frames, we found something else to do. I carried long pine boards to the women using electric sanders to smooth boards spread over saw horses. I stacked the boards in the center of the saw horses, so the women could pull them down for sanding.

In the midst of the hubbub of power tools and hammering, I was reminded of when we built our first house in Western Massachusetts. We already had a large family when we bought a piece of land and then used its equity to get a construction loan. (In all, we spent $60,000 for the land and home.)

The money went farther because Hank and I discovered people were either willing to give us a deal or work for free on the weekends because they wanted us to own a home. Hank is a skilled carpenter who worked alongside most of them.

My job was to bring coffee and pastries in the morning, and then lunch, and beer for after work. Some people confided they did it for the lunch.

On Saturday morning I admired the effort of my fellow volunteers to help a woman who wanted to own a home for her children. And as she worked alongside them, smiling, I knew how she felt.

It was one of those Saturday nights. My best friend Betty and I hung out at my college dorm with nothing better to do. I was still in deep mourning after the guy I loved dumped me. Betty’s ex ran off with a traveling Christian acting group a month or so ago. She heard he was in Washington, D.C., and well, why don’t we see how he was doing.

So we traded her car for her dad’s VW Bug and took off from Massachusetts to D.C.

Let me tell you a little bit about Betty. She was one of the most interesting friends I’ve had. Some people thought she was a little off. I thought she was delightfully different. And, no, she didn’t do drugs.

She had an accident the year before, when I didn’t know her. I believe she slipped on ice and her head came down hard on pavement. She told me when people spoke to her in the hospital she saw their words come from their mouths and spin on a Ferris Wheel before they reached her.

I spent a lot of time at her parents’ home. She was an only child who came late to their life so they were rather indulgent. In her bedroom, they allowed her to write all over the walls and ceiling. I was envious. Her mother and aunt communicated with a spirit using the kitchen table, but that’s for another post.

We drove straight through, with only one near mishap when the Bug spun in snow near a toll booth. Betty had a friend who went to college in D.C. who let us sleep on her dorm room’s floor for a few hours.

Did we find the boyfriend? No. We had a phone number but no luck reaching him.

So we spent a few hours at the Natural History Museum. It was my second time here. The first was on a road trip with my parents when I was a teenager, and during that visit, I saw two men exchange suitcases near the stuffed elephant. The men sat next to each other, placed their cases on the floor, and when each got up, they took the other man’s case and left. They didn’t speak. Spies? I’d like to think so.

So we turned around with a stop at Greenwich Village in New York City, where we bought Betty socks because her feet were cold. We got to her parent’s house that evening. We checked the speedometer in the driveway. We had traveled 1,000 miles exactly. Betty figured her Dad wouldn’t notice, and he never did.

For some reason, the guy thought my name was Rose. Mike and I attended the same college and he was the friend of a friend. Maybe he heard my name correctly the first time and forgot. Maybe he just heard wrong. Maybe he guessed. But I didn’t correct Mike the first time he called me Rose. I smiled and said, “yes?”

I kept it going remarkably for two years. There was nothing romantic between us. We met randomly on campus and at parties. I was always Rose to him. To everyone else I was Joan, a name I don’t particularly like. (I’ve written about this before.) Did I think Rose would laugh more and be less critical than Joan? Would she be smarter and maybe prettier? Nah. I just found it amusing that someone believed I had a different name.
Alas, I was found out. I was standing with friends in the lobby of the college’s auditorium when Mike called, “Hey, Rose.” The friend of a friend turned around. That’s not her name, he said. “It’s Joan.” Of course, her name is Rose, his friend argued.
It was time to fess up.
Mike was dumbstruck. After all, this charade went on for a while. Why didn’t I tell him my real name? The answer was easy. I liked it.

Postscript: We remained friends after that but he called me Joan instead.
Standard

I’m not a religious person. I gave that up a long time ago. But I do have faith in a source, or what others like to call God. It keeps me positive and moving forward.

It is this faith that has me digging in my garden, finishing the beds today, March 30, for planting when the weather gets a bit warmer. I know it’s coming because I see and hear birds that weren’t here this winter. The buds on my lilac, currant, and other bushes have budded. Garlic shoots up above its winter cover.

It is this faith that keeps me writing novels that have yet to be published. I have an agent who works on my behalf but I have yet to catch that all-important break. I want people to enjoy my novels as much as I do creating them. In the meantime I keep writing.

Every day I experience acts of faith, that I will reach the right person in time or events will fall in place. I am delighted each time it happens.

Today the tables were turned on me.

I buy brown rice directly from a farm in California, started by Keisaburo Koda in the ’20s. The farm, now in its third generation, has a low-tech approach to buying. I email them what I want and Keisaburo’s granddaughter, Robin, writes back how much the rice and shipping will cost. I mail them a check and they mail me the rice. We’ve done it a few times.

Yesterday, I emailed my request as usual. Robin replied today with the price and a note she plans to mail the rice tomorrow. She knows I won’t be able to mail the check until the same day. And so, I feel grateful she has such faith in me.

I was on my way home this week when I saw a dead raven on the main road through town. Traffic casualties for animals are common wherever animals cross a busy road like this one or in the case of a bird, swoop for prey.

But a raven? This was a first. Ravens and crows are just too smart to be hit although this bird was.

I remember reading years ago about a New Caldedonian crow named Betty. This species of crow sticks twigs into logs to get at insects and their larvae. As an experiment, biologists at Oxford University gave Betty and a male crow named Abel two pieces of wire to retrieve meat from a narrow tube. One wire had a hooked end. The other didn’t.

Abel chose the ready-made hook. The resourceful Betty took the straight wire and made her own. The birds are that crafty. At least that’s the case for Betty.

(Videos are on the web for those who want to see the famous Betty in action. And New Caledonia honored Betty with a postage stamp.)

Here in Northern New Mexico we have plenty of ravens and their cousins, crows, magpies, and jays. They fly over our spot on this mesa, their wings making a large swoosh as they power themselves forward. Or they sail the wind currents. In town, ravens roost in trees and cluck down at us.

On my early morning drive, I often see ravens hopping on the road, frequently in a group, as they pick on something dead. They deftly get out of the way when a vehicle approaches.

But I had never seen a dead raven until the other day. My theory is something high like a tractor trailer caught the raven mid-flight. How else would such a clever bird be caught?