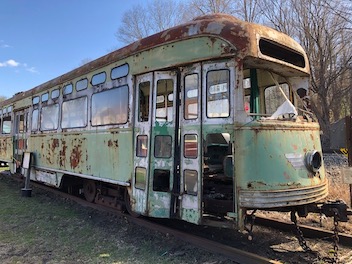 Years ago, when I lived in the Boston area, my only mode of transportation was the MBTA trolley system aka “the T.” In all, I lived in eight different apartments or shared homes. I was a restless person then, but in the process, I got to know the system well, especially the Green Line that served several of them.

And, recently I found it interesting link in the village where I now live — a trolley car that was used on the Green Line. Now in horrible shape (more about that below), it rests in the yard of the Shelburne Falls Trolley Museum. Yes, I rode that car. Many, many times.

First, a little about the Shelburne Falls Trolley Museum, which is located a short walk from our home. The museum is dedicated to preserving and operating the Shelburne Falls & Colrain Street Railway trolley car that ran over the Deerfield River on what is now the Bridge of Flowers for twenty years. No. 10 was built in 1896 and served both communities for thirty years. According to info from the museum, the trolley car was saved by a farmer who for 65 years used it as a chicken coop, tool shed, and playhouse. Since restored, people can ride the trolley car a short distance in the same rail yard.

But my attention during a recent walk was on the PCC Car, the last one built in Massachusetts, by the Pullman-Standard company of Worcester. After running on the Green Line from 1951 to 1985, MBTA 3321 was moved to Brooklyn, New York for a streetcar project that didn’t work out. Instead the car got badly damaged as you can see by the photo when it was flooded during Hurricane Sandy. The museum is hoping to do a cosmetic restoration.

Although the car is tragically a shell of its former self, it brings back memories of being aboard, traveling above and under ground as I headed to downtown Boston or back to where I lived.

I remember bringing four little kids on board, the littlest one strapped to me. All of us holding hands. Or when I was pregnant with one of them. Sometimes I had a folding stroller with me. It was easier to get a seat going toward Boston then going out. I’d stand there holding onto the pole, my belly out to there and keeping the little ones close, maybe one in my arms, until typically some old lady would yell at the men for not offering me a seat. Or she would give me hers.

We did grocery shopping, visited Boston Common, Red Sox games, restaurants, museums etc. You name it, our family went to it on the T. Even now when we visit family who live in the Boston area, we take the T although that’s on the Orange Line.

I developed good balance, enjoying the slight sway of the trolley. And it was a great people-watching opportunity whether on board or waiting on the platform for the next available car.

I can recall the T breaking down and being led through one of the tunnels.

And now I will tell you the best thing I ever saw.

I was walking down the long stairs at the Park Street station to board the T when I noticed a man and dog getting on board when I did. The man spoke to the dog with a command to go home and then left him behind onboard. The doors shut and the trolley moved forward. The dog, some kind of mutt, wasn’t interested when anyone spoke to him. The train kept moving and stopping at various stations. The dog stayed put. And then when we reached a certain stop, Kenmore Square, I believe, the dog got off and presumably did go home.

Now that was a memorable ride.

3 thoughts on “What I Used to Ride”