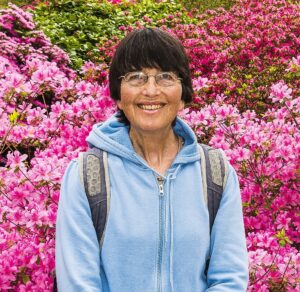 Next up in my Character Traits series is Miriam Drori, an author of both fiction and nonfiction that deal with people who experience deep social anxiety. I’ve learned a lot about the subject from reading her books. Miriam is also my editor at darkstroke books, a skilled one I might add. (She lives 9,000 miles away in Israel.) For this series, she tells us about  Jenny, a character from her latest, Cultivating a Fuji. I will let Miriam take over.

One of the lessons that can be learned from reading Cultivating a Fuji is that the effects of childhood bullying, which the perpetrators might see as a bit of fun, can last a lifetime. That’s what happens to Martin, the main character. Most of the people he meets, whether at school or later in his life, don’t understand this. I don’t blame them for that. They all have their own issues to worry about. Some of them even want to help Martin, but they don’t know how.

Jenny does understand — not at school, where she torments Martin at least as much as the others, but later when she learns about bullying in her teacher training course. There was a real live Jenny, called Gill (soft G, short for Gillian; I know Americans have trouble with that name), who was one of my bullies at school and expressed a lot of remorse for it when she reconnected with me decades later. Too much remorse, in my view, because it led to unnecessary guilt. I was the one trying to persuade her that, as a schoolgirl, she didn’t have the maturity to understand what she was doing, and couldn’t have been expected to understand without adult guidance, which was completely lacking.

That’s why the two names begin with the same sound. Jenny isn’t exactly the same as Gill, and all the episodes in the novel are made up, but they do have a lot in common. Gill certainly recognised herself in the novel. I don’t know if anyone else did.

In the following scene, set in 1973, three young former schoolfriends meet in a café. (Warwick is the university where Anji is studying.)

“You’ll never guess who I’ve seen at Warwick.” Anji had joined Jenny and Sandra on this occasion.

“Martin! And he’s as strange as ever, if not stranger. Always keeps to himself. I don’t know anyone who ever talks to him. I saw him around last year, too, but this year he took computer science with me and I saw quite a lot of him. God, he’s such a weirdo.”

Anji continued, oblivious to the looks passing between Jenny and Sandra. “A funny thing happened with him a month or two ago. I was with a group of friends when I passed him in the corridor. I said, ‘Oh Martin, Professor Angel’ – he’s our computer science lecturer – ‘asked me to tell you he wants to see you urgently. Some big problem with your project, I think.’ I didn’t expect him to believe me; I really put it on – like I did now, you know. Anyone else would have said, ‘Up yours, too,’ and gone off. Not Martin. He turned white and marched straight to Professor Angel’s room. We followed at a discreet distance. He knocked on the door, went in, and came straight out. Walked right past us without noticing. We laughed at his receding back. He didn’t turn around. Nothing. He kept on walking. What’s up? Why are you two staring at me?”

“Anji,” Jenny got in before Sandra joined her. “Grow up.”

Anji frowned and pouted. “What do you mean by that?”

“Jenny and I have discussed Martin before,” said Sandra. “We think we were… less than fair to him.”

“You might think that,” said Jenny. “I think we were bloody nasty.”

Anji laughed. “That’s a good one, coming from you. You were one of the w—”

“I know what I was, Anji. I was a bully. I picked on a vulnerable kid and made things even worse for him. Knowing that doesn’t make me proud of it. I’ve learned too much psychology at college to be anything but totally ashamed of what I did, now that I know how I made him feel.”

“Jenny, Martin is a robot, an automaton. He does what he’s told. He doesn’t have feelings.”

“We’ve discussed that, too. Everyone has feelings. Some people wear them on their sleeve, while others lock them away. But everyone has them.”

During the silence that descended on their table, Roberta Flack was apparently losing her life to a song, lightning flashed in and out of their lives, and a waitress dropped a cup full of coffee. It splashed on her sandaled foot and she uttered a little scream.

Miriam Drori was born and brought up in London, but has lived most of her life in Jerusalem. Here, she married, raised three children, and worked in computer programming and later technical writing.

Miriam has been writing fiction for about fifteen years and has been published numerous times. Some of her books are temporarily unavailable due to changes in the publishing world. She began writing in order to raise awareness of social anxiety. Since then, the scope of her writing has widened, but she has never lost sight of this passion.