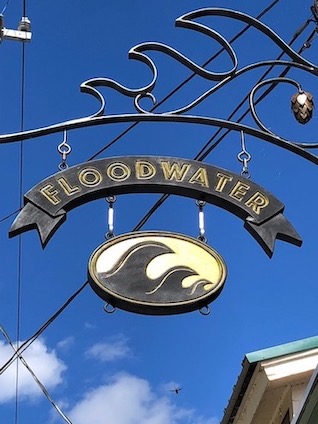 This is a true story although I can’t divulge names because that would give away too much of the plot for Following the Lead, no. 6 in my Isabel Long Mystery Series. But even so, it’s one worth telling.

I’ve mentioned in previous posts that our son, Zack owns Floodwater Brewing in our village of Shelburne Falls. And this where I met, oh, let’s call him Mr. X, one of the regulars.

Mr. X, who lives within walking distance of the brewery, loves to play cribbage. So does Hank. And they will often coax one or two people to join them playing a game I don’t understand that involves moving pegs around a board depending on what cards you and the others are holding. Floodwater has a cribbage board that resembles a small table so the players gather around on chairs.

Originally from Canada, Mr. X has lived in Western Massachusetts for many years. He’s got a great sense of humor that sometimes borders on him being a wise guy. He also reads all of my books, including the Isabel Long Mystery Series.

Mr. X likes to dish out the wisecracks, especially when I was the editor-in-chief of the local daily newspaper. One day, I decided to dish it back. I told him, “I’m gonna put you in one of my books and kill you off,” or something close to that. He laughed.

Then, I forgot I said it.

But I guess others didn’t. I was reminded one day by Mr. X’s pal and fellow cribbage player that I threatened to bump him off in one of my books and how much he loved that idea. That was when I was about a third of the way through Following the Lead. I checked in with Mr. X, who said he would be delighted if that happened.

Oh, dear, how was I going to pull that off?

In the past, I have used the names of real people in my books as a prize for a virtual launch party on Facebook. But I specifically created characters I thought they would like. One was a ranger, another a mail deliver. I even used the names of people’s pets.

Yes, I use Mr. X’s real name in Following the Lead. Let’s say he is what I would call a person of interest in a case involving a baby’s abduction from her front yard 49 years earlier. Isabel feels he may have useful information, but she is having the darndest time trying to meet him in person. So for a good part of the book all she knows about this person of interest comes from other people.

While writing the book, I would tease Mr. X about his character but reveal nothing when I would see him at the brewery. I didn’t even let him see a draft. But I know he’s looking forward to reading it when the Kindle version comes out Nov. 3 since he’s told me so.

And, that’s all I’m going to say right now abut Mr. X and his doppelganger.

BOOK LINK: Following the Lead will have a Nov. 3 release for Kindle and soon after for paperback. It is now in pre-order mode and I am grateful to those who do that. It helps with ratings. Thank you. Here is the link: https://mybook.to/followingthelead

ABOUT THE PHOTO ABOVE: That’s the wooden sign above Floodwater our son, Zack hand-carved and painted. There’s one more piece to go. Here’s the link to the website: http://floodwaterbrewing.com/index.html

Well, it was a first for Stella, the cat we adopted two years ago. Her lap of choice belongs to Hank, who manages to stretch his legs over the coffee table for hours to accommodate her. There have been times she has considered mine when I was sitting on the other side of the couch. She would give my lap an appraisal, decide it wasn’t a right fit, and instead plopped down on the couch cushion next to my hip. But yesterday was different.

Let me backtrack a bit and tell you about Stella. She’s a Maine coon cat, who got dumped in a nearby city during Covid and found her way to a friend’s backyard, where she got fed and found shelter. But when Cris, who already had a cat, mentioned on Facebook she was looking for a home for the stray, we welcomed Stella into ours.

I believe because she was living for months in the outdoors, and due to the nature of her breed, she is a bit of a wildling. But Stella — I love to shout her name out loud — has decided it’s worthwhile to live with us.

Stella actually is a cheap cat to own. She snubbed her nose at the expensive natural cat foods we bought her in preference to a national brand, plus these snacks she is crazy about. Actually, her food of choice is the rodents she captures. Sometimes we will hear her make this special meow that means she’s got something dead in her mouth that she wants to show off. Yes, we praise her for her hunting abilities. Toys? Nah, she’s got the real thing to chase. She prefers the outdoors instead of the litterbox.

Stella comes to us when she damn feels like it but loves the attention when she does — going absolutely nuts purring as she’s petted. She spends hours cleaning and grooming her beautiful fur. One time when I was writing on the front porch, she dropped a dead mouse beside my chair and commenced to eat the entire bone-crunchy thing.

Admittedly, Stella loves Hank more than me and she shows it by sitting on his lap. Even that took some doing. It was actually our son, Zack who broke the ice. He was visiting after a run and she jumped onto his lap to smell his perspiration. Hank came next.

But it was different yesterday. I was sitting on one of our Morris chairs (hand-built by Hank) with my feet on a stool, reading Helen Matthew’s The Girl in the Van. Stella had finished eating her snacks on the coffee table when she began eyeing my lap. “Yeah, right,” I told myself.

I was amused as Stella leaped to the arm of the chair and after studying my body more, she gingerly made her way onto my lap. Her paws, killing claws intact thankfully, kneaded me, and then she curled around, purring as I petted her. She stayed that way. I read and kept a hand on her. She slept. Dinner would be later than usual.

I stretched to get my phone to call Hank who was working in his woodshop. He laughed when he saw Stella. “It feels good to have a cat on your lap, doesn’t it?” he said.

LINKS TO MY BOOKS: While I have your attention, here’s the link to my books on Amazon, specifically the Isabel Long Mystery Series. (Yes, there’s a cat in it.) Following the Lead, no. 6, will have a Nov. 3 release. I am grateful for pre-orders as it helps with ratings. https://www.amazon.com/Joan-Livingston/e/B01E1HKIDG