For the next few weeks, I will be running posts that appeared in blogs by my fellow authors and others. Here is one about writing poems for my latest mystery, Checking the Traps. Not my typical form of expression, but my victim and a suspect write poetry. So, I had to. This post appeared in author Angela Wren’s blog: http://www.angelawren.co.uk/

Like what you read? Here’s how to buy the book on Amazon: https://mybook.to/checkingthetraps

I wrote poetry before I could write prose. I began in college, where I fancied myself a poet, and a few years afterward until real life, including having six kids and a 25-year writer’s block, took over. When I did resume writing, I turned to prose, that is, novels and short stories. I no longer wrote poetry. Ah, but that changed when I wrote the third book in my Isabel Long Mystery Series.

In Checking the Traps, Isabel is hired by a local bad boy drug dealer, Gary Beaumont, to find out how his half-brother died. Did Cary Moore jump from a bridge known for suicides or was he pushed? But what fires up Isabel’s interest in this case is that Cary drove heavy equipment by day and wrote poetry at night.

Gary lends Isabel the notebooks in which his half-brother transcribed all of his poems. As Isabel discovers, Cary’s poetry in the early books are really juvenile. But he gets better, well, enough that a famous poet uses the poems for his own in what turns out to be an award-winning book. (Yes, the poet is a suspect in the man’s death.)

Isabel also finds poetry that Cary wrote as gifts for other people.

So, that meant I had to write poetry, too, for this book.

Actually I found writing poetry wasn’t hard at all. I was able to channel that inner poet to come up with several complete poems plus lines from others. I tried to imagine what a man who had never gone farther than 100 miles from his country home would write about and how he would write it. I figured on a plain but sturdy style of writing. There would have lots of imagery from nature. The poems would not be long.

Poetry, including a reading where Isabel corners the famous poet, figures big in this book.

Did the experience inspire me to write more poetry? I will be honest and say no. But I enjoyed letting one of my characters do it instead.

Here’s an excerpt from Checking the Traps. Jack is the owner of the Rooster Bar, where Isabel works part-time. He’s also her love interest in this series.

Jack motions me to come behind the counter.

Jack hands me a paper. I immediately recognize Cary Moore’s handwriting. It’s a poem he called “The Barman.” It’s a lot more sophisticated than his second book of poetry, aptly named Book Deuce, which I read this afternoon after Ma and I returned from our field trip and before I got myself ready for work. Cary got heavy into rhyming with Book Deuce. Sometimes it works, a lot of the time it doesn’t. They remind me of the poems I read when I was a kid in elementary school. It appears Cary read them, too.

But here’s “The Barman.”

What’ll it be tonight, boys?

The barman asks each one.

Give me some hope in a bottle.

He even signed the bottom.

“I like it a lot,” I tell Jack. “You should frame it and hang it behind the bar. Want me to do that for you?”

The book I’ve owned the longest is the Fundamentals of Poetry, a 32-page paperback I bought in the eighth grade. It’s water-stained and worn, but it has outlasted so many other books and moves. 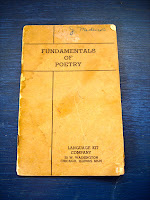 I bought Fundamentals, published by The Language Kit Company of Chicago, through school. A teacher long ago wrote my first initial and Medeiros, the last name I was born with, on the front cover before she handed it to me.

I wanted to be a poet then, or at least understand how poetic English language works. I was fortunate to take a weekly creative writing class in fifth grade. Mr. Graves taught us about metaphors and similes, and how to use them. Unfortunately, my classroom teachers for the next few years didn’t.

So the dactylic foot contains three syllables with the stress on the first — like happiness and young again. And personification is the “giving of human characteristics to inanimate objects, ideas, or animals” such as a line from Sara Teasdale, “Bright April shakes out her rain-drenched hair.” At the end of the book, the reader is supposed to analyze Tenneyson’s “The Charge of the Light Brigade.”

When I once was a poet, I used free verse, which “consists of lines that do not have a regular meter and do not contain rhyme.” Now, I write fiction. And, although I skip the parts about meter and verse forms, I still find this slim book as helpful as a ….