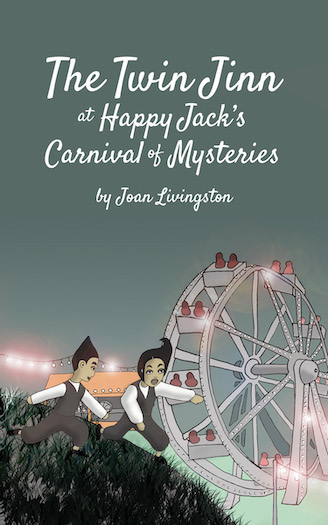 A bit of news: I am delving into 2021 with a new series, starting with the first book, The Twin Jinn at Happy Jack’s Carnival of Mysteries. I wrote this series for middle-grade readers, but I hope they will appeal to adults who read to and with kids, plus anyone who enjoys magical realism. I expect a February launch.

Right now, Michelle Gutierrez, who designed two of my adult books, has just completed the cover, using an illustration created by my son, Ezra Livingston, and is working on the Kindle and paperback versions.  That’s the cover above.

So, what’s this book about? Here’s a description:

Forget about genies who are fiery spirits or live in lamps. The Twin Jinn at Happy Jack’s Carnival of Mysteries is a story that will make readers believe they are real.

Jute and Fina Jinn, brother and sister, and their parents are enchanted beings who seek refuge at a traveling carnival after escaping their cruel master. While in hiding, the twins must pretend to be 11-year-old humans, but mischievous and curious, they sometimes get carried away. Who could blame them? The twins have the power to fly, be invisible, and use spells. Thankfully, they have an outlet as carnival kids assisting their parents in a magic act and making friends with their fellow performers, including a shy boy.

Still, amid the fun, there is danger for the Jinn family because their former master, a man with evil intentions, is desperate to get them back, and having a magic act that turns out to be a huge hit could be their undoing.

I’ve tried for a long time to find a publisher, and at one point, even had an agent pitching the series, but, alas, with no luck. So, I’ve decided to do it on my own, with Michelle’s help. Besides I’ve become more savvy about promotion on social media.

So far, I have completed three books in the series  and I’m about a third of the way into the fourth. Stay tuned for news about pre-orders and the launch.