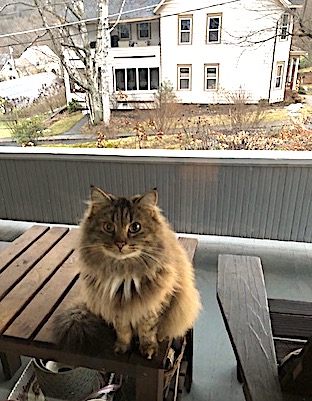 Ours was a quiet, stay-at-home end of 2022 although I was charmed to be awakened at midnight, I presume, when somebody in the neighborhood shot off some kind of fireworks. Awoken, Hank and I wished each other, “Happy New Year.”

I recall one New Year’s Eve in a small town’s only bar when it seemed everyone in the joint was planning to quit smoking at the stroke of midnight. So naturally, they were all smoking their brains out that night.

That was before Massachusetts officially banned smoking in bars and nightclubs. But that night the cigarette smoke hung in a thick cloud over our heads. The man in the next table chain-smoked. “Quitting for the new year?” I asked. Yup, he said, although he ended up sticking with the habit.

Here’s another memorable New Year’s Eve: getting stuck on a train from Boston to Philly to meet my future in-laws because another train had derailed. Most of the passengers were headed to Times Square in New York and keenly disappointed they weren’t going to make it. People got drunk. A fight broke out and the cops had to come on board.

Resolutions? I make them year round so why bother tonight? I do hope Hank and I are able to travel.

Reflections? It was a productive year. I retired from journalism for good. I published three novels, thanks to darkstroke books, and started another. (I am a third of the way into no. 7 in my Isabel Long Mystery Series.) I’m glad to see our children and grandchildren doing well. We live in an interesting house, well maintained thanks to Hank, in an interesting village. There have, of course, been challenges, but I will spare you those.

For the past few days, I’ve been saying “Happy New Year” to strangers such as grocery store cashiers and post office clerks. Everyone has been receptive. I wish the same for you. To a Happy New Year. I like the sound of it myself.

ABOUT THE IMAGE ABOVE: Our cat, Stella, sits on the front porch table, telling me it’s time for her to come inside. 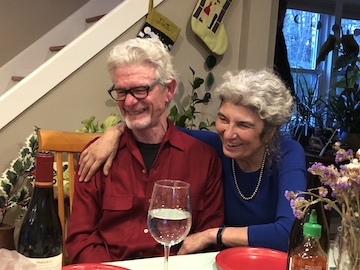 I wrote this post in 2013 when we were living in Taos, New Mexico. It’s still a good read and I’ve added a new ending.

I liked the ones we spend with our large family. Great food and laughs, gifts, and even one year, fireworks one daughter bought along the way from her home in the South.

We had a freshly cut tree with ornaments, many of them made by the kids. Why was one son’s Santa wearing gray and yellow? Because the red felt was already taken. Why did another son’s wooden Santa have a black, bandit’s mask? Just because.

I remember the Christmas after Hank was hurt on a  job site a few months before. He fell 18 feet onto his shoulder because someone didn’t nail a board in place. He couldn’t work. The people who hired him as a subcontractor wouldn’t pay him while he was hurt.

After all those years staying home with six kids, I found a one-year teaching job. We kept things going with a starting teacher’s pay.

It was close to the holiday when we came home with the kids. A large cardboard box was on our doorstep. It contained food and an envelope with $70 in cash.

We asked around but no one would admit to it. The kind deed has not been forgotten.

So what will we do this year? We live thousands of miles from the people who mean the most to us. (One daughter did visit for a few days — thank you — and we’ve had family come in previous years.) And with early deadlines at work for the holidays, it is too difficult to get away.

But Christmas in Taos is interesting, what with our three cultures. Think luminarias — we call them farolitos in Taos — along the parapets of buildings and in yards.

We have gone to the Pueblo on Christmas Eve to watch the lighting of tall bonfires and the procession for the Virgin Mary, and then to the Taos Inn for holiday cheer. This year we will have Christmas dinner with friends with the usual fixings of del norte — tamales and green chile posole stew. We don’t have a tree but a scene with miniature trees, lights and pine cones I created on the window sills in the great room.

We will call the kids and my parents that day. We will tell them we miss them and wish we were there for Christmas.

That was then and this is now. Our family has changed. My father is no longer with us. We now have two grandchildren. And Hank and I live in Western Massachusetts. To be honest, except for a swag on the front door, I didn’t decorate this year but I made lots and lots of cookies to share.

We will be spending Christmas Eve and Day at our daughter Emily’s house near Boston. Four of our six kids will be there plus our granddaughters. Our son-in-law’s family will join us. We will eat, drink and make merry. Happy holidays.

ABOUT THE PHOTO ABOVE: That’s Hank and I at our son Nate’s house on our first Christmas on the year we returned to Western Massachusetts.

For the first time in 13 years, we have a Christmas tree standing inside our living room. When we lived in New Mexico, we never got one. It somehow didn’t fit the place where we were living, and besides the guy selling trees had a real shady past. Last year, we were renting an apartment while we renovated the home where we now live. But this year? It’s time to get out the ornaments that have been stored in

boxes all these years.

But first the tree. I really didn’t want to spend an arm and a leg for one. Our son, Zack, told us about Pieropan Christmas Tree Farm that grows its trees from stumps instead of replanting them — it is billed as one of the oldest farms that grows this way. It’s located only one town over. And any tree is $30. Sold.

So, on Saturday, after paying our money to co-owner Emmet Van Driesche, we hiked around the sloping hill looking for a tree worth cutting. First, I ha

d to get over the fact that these trees are on the funky side. But what did I expect? They grow out of the stumps of previously cut trees. Fortunately for us, the tree would back against a wall in our living room, so really we could get a tree that was indeed a bit funky. It took a while, given my spouse’s tendency toward perfection — although I did say for a guy who didn’t want a tree in the first place, he was being awfully fussy.

But we found the tree. The sharp saw the farm provides did the job and it fit easily in our car.

Sunday it took a while for me to get the tree to stand upright in its stand. The trunk’s wood was so tight, it wouldn’t sink into the metal points inside the stand. Brilliant me, I chopped at it with a hammer’s claw until it could.

Then I hung the lights, the wooden beads and dug into the ornaments, many ofwhich date back forty years when we didn’t have a pot to you know what. These are the ones I made from cloth and clay, plus ones I picked up over the years. There

are the ones the kids made in school or bought when they grew older.

In anticipation of a visit by our toddler granddaughter, I arranged the tree so the fragile stuff is up high. She can freely touch whatever is low. And Hank wired the tree to the woodwork, so, kid, it ain’t going anywhere.

I like our tree. It fits nicely against the wall. It holds a lot of memories. And I like that it came from a place that makes Christmas trees sustainable.

Want to learn more about Pieropan Christmas Tree Farm? Here’s a link to a news story in the Greenfield Recorder: Recorder story

And happy holidays to family and friends near and very far away.