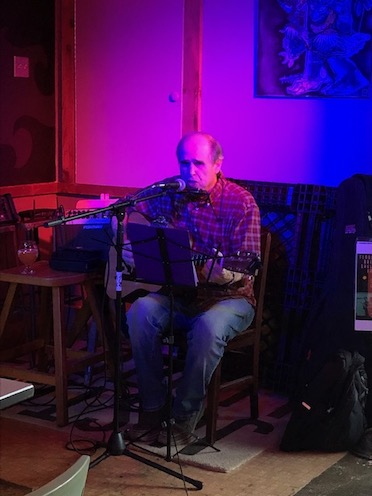 I am fortunate to have a son who owns a microbrewery — Floodwater Brewing. Besides brewing great beer, Zack has created a community space in our Shelburne Falls Village for locals and visitors along with musical entertainment, games, and comedy. And I joke as his mother, I get free beer for life. Besides that perk, paperbacks of my Isabel Long Mystery Series are on sale. They even have their own shelf built by Hank.

Admittedly, the vast majority of my book sales are through Kindle as digital is the preferred way to read for so many people. I am also grateful that digital enables my books to be available to readers around the world. But then, there are those who prefer a book in hand, whether they’re old school readers or people who already spend a lot of time staring at a computer screen. So, for paperback readers, I offer them the books in my series at what I call the Floodwater Discount. I can do that since my son doesn’t take a cut, nice kid that he is. (He also named one of the beers and a tank for me.)

Sometimes it’s an impulse buy for a visitor to Floodwater. Sacha, one of the bartenders, recently sent me a text about a woman who came in on a Sunday afternoon and bought all five books. The woman hugged them — Sacha sent me a photo — and jumped up and down, excited to have the series. I am sorry I wasn’t there to thank her.

There have been times when someone bought a book off the shelf, and then discovered I was sitting at the bar across from them. I went over to talk.

I have also done two readings at Floodwater and will likely do more.

Other times, people have bought the first, got hooked and continue through the series. That’s what’s happening with musician Scott Cadwallader, who performs at open-mic nights at Floodwater. On Sept. 2, he did a solo show. Scott plays the originals he has skillfully composed, no covers, but that night as a tribute to my series, he started his set with “Good Hearted Woman.” I believe Scott is onto book no. 3.

That’s Scott playing the tune in the photo above.

“Good Hearted Woman” is a Waylon Jennings song about a woman who will put up with her man’s rowdy habits. The song is on the playlist for the bands that play at the Rooster Bar, where Isabel Long tends bar on Friday nights. It is the first song she and Jack dance to in Chasing the Case, the first in the series. It eventually becomes their song.

On the other side of the room, the Slim Jims gulp down beers before their next song. One of the Jims leans into the mike. “This is for all you bad hombres lucky enough to have a woman like this.” Then the crowd goes a bit nuts when the Slim Jims play the familiar opening to Waylon Jennings’ “Good Hearted Woman.” Yeah, I bet all the bad hombres in this room would like one of those gals.

Jack drops a full tray on the counter and before I take anything, he grabs my wrist. He tips his head toward the direction of the band.

“Come on, Isabel, let’s dance,” he says, and then he announces loudly, “The bar’s closed. No beer until this song’s over.”

I let him drag me onto the floor. I haven’t danced in well over a year. Jack’s a bigger man than Sam, but I’m surprised by his moves. I can’t recall seeing him dance before, but then I might have just been having too good a night out with Sam that I didn’t pay attention. I let him have the lead, and he’s got me twisting and twirling on the dance floor. I hear myself laugh. Jack laughs, too. The other dancers move aside for us. He’s got that big Jack Smith grin going. He’s spinning me this way and that, and even ends the tune with a corny, little dip. We get a cheer from the customers when he pulls me upright at the end.

I’m a little breathless, but I manage, “Thanks. That was really fun, Jack.”

“We’ll have to do it again soon,” he says, and then he jokes, giving me a loud but friendly, “Now, woman, git back behind the bar.”

So thanks Scott for playing that song and for everyone who stops by Floodwater and buys one of my books. Stay tuned, Following the Lead will be out Nov. 3. Here’s the link to preorder and magically it will appear in your device that day: https://mybook.to/followingthelead

Alas paperback readers will have to wait a little bit longer.

FLOODWATER: The brewery, owned and created by Zack Livingston, is within a short walk from the noted Bridge of Flowers in Shelburne Falls, Massachusetts. Here’s the link to learn more http://floodwaterbrewing.com