Next up in this series is Paula RC Readman, a fellow darkstroke books  author who lives in the UK. Paula is the author of the Stone Angels, an intriguingly dark novel I enjoyed. Frankly, I believe it would also make a great movie. For this post, Paula has chosen James Ravencroft, the highly flawed protagonist of her novel. Her journey as a writer and author is also well noting. Here, I will let Paula take over. 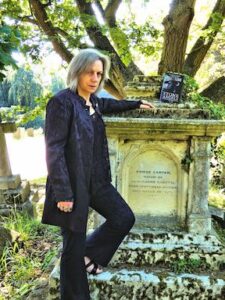 Thank you Joan for this opportunity to introduce my main character from Stone Angels to your audience, James Ravencroft, an artist with a dark heart. He’s passionate about the pure beauty of art. James first appeared in a winning short story I wrote for the Harrogate Crime Writing Festival/Writing Magazine Competition in 2012.

“Hey, be careful with that!” the man snarled. With a single sweep of his hand the dangling picture found its place. He then turned his dark blue eyes on me, his shoulder-length black hair shone under the lights. In an upper class tone, he stated, “Aesthetics, my dear woman, art is for art’s sake,”

I caught my balance, and stepped off the ladder.

“Ravencroft,” the man said, offering me his hand, as his dark eyes shone with an eerie hilarity.

I ignored his proffered hand, and instead snatched up my clipboard, hoping he would just leave us to do our job.

“I love your work.” Jude fluttered her eyelashes and flashed her winning smile at him. He chose to ignore her, turning his attention fully on me.

Ever since he had arrived in the gallery with these godless pictures, Jude swooned over this hedonistic, overbearing man in his tight black jeans. I had kept my distance.

“Tina isn’t it?” he said, extending his hand to me again.

I nodded, still not accepting it.

He let his hand drop, unlike his smile. With a nod in the direction of his paintings he said, “You’re doing a grand job, though I expect the public will find something to criticize.”

I lowered my clipboard, “Really?”

“Yes,” he said, letting the word out slowly, “Tell me honestly what you think of my work.”

“Your work?” I shook my head. I had no wish to share my thoughts with the likes of him

“I see a darkly delicious city alive in the crowded street below,” Jude said.

Ravencroft turned to her, his smile too sweet, too nauseating. “I wasn’t asking you, my dear.”

How did you come up with the character and his name?

I knew I wanted the name Raven . . .  Something. James Raven on its own was a flat name to me. It didn’t roll off the tongue. According to my dictionary of surnames, Ravenscroft is a town in Chester, England. I just dropped the S, so it became Ravencroft. James’s description I based on the 15th century German artist, Albrecht Durer. There’s a famous self-portrait of the artist with his flowing hair.

Tells us more about Stone Angels.

The inspiration for Stone Angels came from my short story I wrote in 2011, which won the Harrogate Crime Writing Festival/Writing Magazine Competition the next year. The story Roofscapes was told from the view point of Tina Whiteoaks, a picture hanger in an art gallery. She met James, who wasn’t the main character in the story, through her work. In fact we learn everything we need to know about James through Tina and her friend, Jude via their emotions and reactions to him, and his interplay with them. Jude admired James on two levels as an artist, and a subject of desire. Tina, on the other hand found him to be hedonistic, arrogance, and intimidating.

Was a real person your inspiration for this character?

Yes and no. Yes, in as much as my research into serial killers show that most had the ability to be charming and unthreatening to their prey. No, not anyone I know personally who is a serial killer, but a mixture of arrogance and manipulative people I have known during my life time, mentioning no names of course.

Is your character likeable or not?

Yes, James Ravencroft is very likeable. Many people would find him charming, intelligent, a little reserved at times, and even charismatic. Most serial killers are highly intelligent, (it’s why most of them get away with their crime for so long) until you discover their darker side, by which time it’s normally too late if you’re their chosen victim. Of course James’s upbringing, like so many real-life serial killers, has some bearing on his outlook on life.

Paula R C Readman is married, has a son, and lives in Essex, England, with two cats. After leaving school with no qualifications, she spent her working life mainly in low-paying jobs. In 1998, with no understanding of English grammar, she decided to beat her dyslexia by setting herself a challenge to become a published author.

She taught herself “how to write” from books her husband purchased from eBay. After making the 250th purchase, Russell told her “just to get on with the writing.” Since 2010, she has mainly been published in anthologies in Britain, Australia, and America and won several writing competitions. In

One of the pluses of being part of Crooked Cat Books and darkstroke books is getting to know my fellow authors. I am impressed with those who are friendly on social media — the group is spread around the world — and generously support each other. So for my part, I am offering a bit of space on my website with a new series called Character Traits. 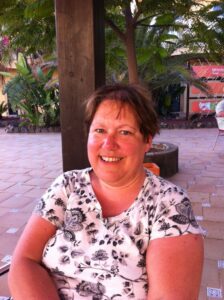 The series begins Wednesday with Val Penny, an American who lives in Scotland, and is the author of the Edinburgh Crime Mystery Series featuring D.I. Hunter Wilson. I understand she has a new series in the works as well. I look forward to that … and finally meeting her in Edinburgh when we can safely travel again. Val has been a huge ally in this publishing game.

So, what is Character Traits about? I am asking authors to write a post about a character — it doesn’t have to be a protagonist — from one of their books and/or series. I am booked until the end of the year, but I am hoping to keep this going. Send me a message on Facebook or leave a comment here on how to reach you. Those who have my email address can contact me that way.

What I hope for: Introduce your character and the important role that person plays in your novel(s). Here are some questions to consider. How did you come up with this character? The character’s name? Is a real live person the inspiration? If so, how did people who know that person react? Is your character likable — or not? If you are writing a series, will this character continue? I welcome your own insights.

How about including a brief scene — say 200 words — where your character appears?

Give me a short bio of you, the titles and Amazon links to your books, your photo and cover of the book your character appears in.

I will be publishing these on Wednesdays. My deadline is the previous Wednesday.

FREEBIE SATURDAY: Thanks to those who downloaded Redneck’s Revenge, No. 2 in my Isabel Long Mystery Series, on Saturday, Nov. 14. My goal is to attract more readers.

ABOUT THE PHOTO ABOVE: That’s the top of the piano that came with out house — a long story there. Hank made the candlesticks. The pottery is part of a small collection. And the silk screen print showcases the Bridge of Flowers in Shelburne Falls Village where we live.