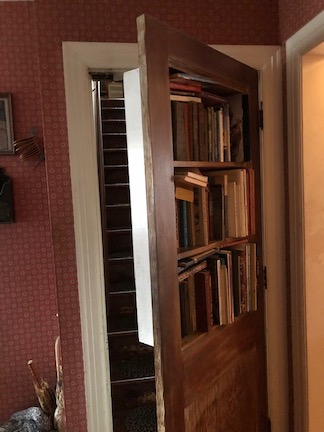 Who wouldn’t want to live in house with a secret passageway? I did, sort of, when I was a growing up.

When my industrious parents constructed their Cape-style home, they held off having bedrooms in the attic for years. The door they had built blocking the upstairs wasn’t ordinary, however. It was also a bookcase with paneling at the bottom, and if someone didn’t notice the hinges, they wouldn’t think it was a doorway.

It was our secret passageway. And I always felt it was one of the best features of our house — along with our player piano in the cellar, my father’s gardens, and a huge genie my mother painted on the wall beside it.

Eventually, the upstairs bedrooms were finished when our family expanded to four children. We three girls slept upstairs. The bookcase door was then moved upstairs to seal off a storage area. Now that no one sleeps there except for visiting family, the door is back where it was originally installed on the first floor. Old books fill its shelves. You can see it in the photo above.

My fascination for secret passageways was intensified as a kid when I read Anne Frank’s Diary of a Young Girl. This book wasn’t fiction, but a moving account of how her family and others attempted to survive the Nazi regime in Amsterdam by hiding in the Secret Annex. That doorway also was disguised as a bookcase. Unfortunately it was not enough to keep Anne and the others safe. Our experiences couldn’t have been more different.

During my childhood, I read Frances Hodgson Burnett’s The Secret Garden and Lewis Carroll’s Alice in Wonderland, and the entire Wizard of Oz series by L. Frank Baum. There were other books and movies in which people could escape to some place secret and didn’t know what they would find there.

The bookcase door in my parents’ home, alas, didn’t bring me to a magical place. But it certainly kindled my imagination, and I thank them for that.

NEW BOOK: I credit the imagination I had as a child and the determination I have as an adult for creating yet another book: The Sacred Dog. This thriller set in rural New England launched Dec. 27. Kindle readers can find it here: https://mybook.to/thesacreddog The paperback version will follow soon.