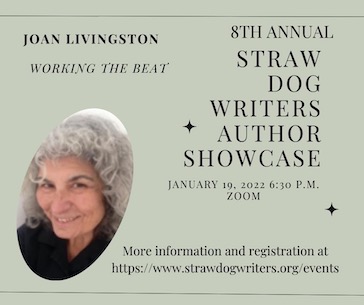 One of the themes in my Isabel Long Mystery Series is small town life. I’m talking about really small towns, around a thousand people or fewer, in rural Western Massachusetts. I got to know this part of the U.S. intimately as a reporter for a local daily newspaper and, of course, from living there.

And though the books in my series are fiction, I draw from those experiences to create what I feel are accurate portrayals of how people interact there, including in Working the Beat, number 5, which launches Jan. 27.

First a brief synopsis of Working the Beat: Isabel Long finds her next case at a country fair when she is approached by a woman whose grandson’s body was found there four years ago. Shirley Dawes took in Lucas Page after his mother abandoned him, doing her best after failing to protect her own children from her late husband, a no-good abuser. The official ruling is that he slipped and fell in a ravine behind the demolition derby. On the case, Isabel finds evidence, a bag of jewelry to be specific, that Lucas might have a connection to a string of break-ins in the hilltowns — yet another unsolved mystery. Was Lucas part of the ring of thieves? Or was he trying to do the right thing and died as a result of it?

So small town life isn’t like what you see in postcards, and that’s what makes it an interesting setting for my series.

For the most part, people, at least in New England, are nosy as all heck. We can’t help it. We know who drives what vehicle, who’s getting divorced or hooking up, and what trouble our neighbors are getting themselves into. Actually, Isabel counts on that kind of behavior because these nosy folks offer her clues, especially the Old Farts, a group of gossipy men who hold court in the back room of the local general store.

These towns don’t have a lot of commerce, not even a downtown. They are lucky if they have a general store, even luckier if it has gas pumps. Maybe there’s a bar or a restaurant, a church, typically Protestant, and a school, if the town has enough kids. Worthington, where I lived for 25 years in Massachusetts, used to have one stoplight, but the state removed it last year.

Politics is personal in a small town. How can it not be when you pretty know everyone who lives around you?

Then, there’s the potential conflict between natives and newcomers. These towns have their share of families that have been there for generations, like Isabel’s significant other, Jack, who owns the Rooster Bar and Grille where she works Friday nights, and are pretty proud of it even if they don’t have a lot of money. Then there are those, who move there from the big city. Some, like Isabel, embrace the town for what it is and then there are those whose idea of country living conflicts with what is real.

Isabel Long lives in the town of Conwell. The neighboring towns are: Penfield, Titus, Caulfield, Dillard, Jefferson, Mercy, and a new one with number five, Rossville. Don’t bother looking for them on a map, however. They’re all in my head.

Here’s the link to Working the Beat: mybook.to/workingthebeat

ABOUT THE PHOTO ABOVE: I will be doing a reading Jan. 19 along with other authors from Straw Dog Writers, a group in Western Mass. via Zoom. I get five minutes to read from Working the Beat. I am pleased to have this opportunity. Yup, I’ve been practicing. And you are free to join us.

One thought on “Writing About Small Town Life”