Specifically, I am writing about those women who appear in my Isabel Long Mystery Series. My characters become very real to me, so real I let them stick around through the series. Of course, a few are one and done in a book. Two were already dead by the time Isabel got to investigate how that happened. Today I will write about five of the women in Working the Beat, No. 5 in the series, which 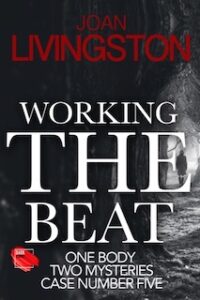 incidently has a Jan. 27 release. (I will be writing about the men another time.)

ISABEL LONG: Isabel is a private investigator who uses the skills she acquired as a former long-time journalist to solve cold cases in the fictional hilltowns of Western Massachusetts. And so far, she’s really good at it. Readers learn all about them through her eyes and sometimes snarky humor. She’s a rather recent widow, who ended her year of grieving by taking on her first case: solving the disappearance 28 years earlier of a woman in her town. She also tends bar Friday nights at the Rooster, the only watering hole in her tiny town. That’s how she hooked up with its owner, Jack, a local guy. They have what I would call a fun-loving relationship. She’s got a family — three kids, one granddaughter and her mother who lives with her — and Jack doesn’t. He worries about her getting hurt on the job, yes, it’s happened, but she tells him she just needs to be smarter.

MARIA: Maria is Isabel’s mother, so most of the book she’s known as Ma. She turns 93 during the series. She came to live with Isabel when both of them were tired of living alone. It’s been an adjustment for Maria, coming from the Eastern part of the state. Like her daughter, her Portuguese heritage is important. Isabel calls her mother, her partner in crime, because she helps her solve cases. A big fan of mysteries, in books and on the screen, she gives Isabel wise counsel and enjoys the excitement. I was inspired by my own mother, who is 97, to create Maria.

ANNETTE WATERS: Isabel calls Annette the “Tough Cookie” but never to her face although frankly, she would like the nickname. Isabel met Annette in the series’ second book, “Redneck’s Revenge,” when she asked her to investigate the death of her father, who died when his shack of a house caught fire. He was supposed to have been too drunk. Annette is a mechanic who owns Rough Waters Garage and Junkyard. She’s also a single mother with an adult son, who she tries to help with a job and direction. Besides working hard, Annette likes to play hard, and if she sees a man she likes, she’s not shy about it. She hasn’t had a steady guy, well except for one brief marriage. The Tough Cookie doesn’t take crap from anybody, is a serious wise-cracker, and in Working the Beat, she drives in the demolition derby.

MARSHA DUNLOP: Marsha has been with this series right from the first, Chasing the Case, when she was a person of interest. She is a first cousin of Annette, and it is Marsha who turns her onto to Isabel for help. She’s usually with her cousin, and in fact, the two of them bought a convenience store in the middle of nowhere, but the Pit Stop does well because they sell gas, booze and cigarettes. Marsha’s nickname? The Floozy. I don’t know why Isabel came up with that one because Marsha has a steady guy, but it’s stuck.

SHIRLEY DAWES: Shirley is a new character. She hires Isabel because she doesn’t feel her beloved grandson died by accident — falling into a ravine while everybody was watching a demolition derby at the Titus Country Fair. Shirley has had it tough. She married a no-good abuser who fortunately died, but not before making her and their two children’s lives miserable. Her drug-addicted daughter left Lucas with her mother, and Shirley tried her best to give him the good life her own kids didn’t have. She’s rough around the edges, a little deaf, and a hoarder. I’m surprised Isabel didn’t give her a nickname.

Here, I’ll give you an excerpt from Working the Beat. Here Isabel and her mother meet Shirley, who approached them at the Titus Country Fair.

Shirley stays sitting when she sees us approach. I make our introductions, and then we take the seats opposite her at the picnic table. I make sure I’m in Shirley’s direct line of vision in case she reads lips.

Shirley works her mouth a bit.

“It’s about my grandson, Lucas. Lucas Page is his full name. He was killed here four years ago and whoever did it didn’t get caught.”

She gives her head a shake.

“I mean here at the fair. It was after the demolition derby, the first one they had. They found Lucas’s body the next morning behind where everybody watches, in the woods up there. They said he must’ve been drunk and fell down in the rocks. His head was hit real bad I was told.”

“What was he doing on the hill afterward? Was he alone?”

“That’s what I want you to find out.”

This story’s coming back to me now. I was the editor of the Daily Star then. We reported on an unattended death at the fair in a story that made the front page, and then like Shirley said, it was ruled an accident because of a brain injury, although she protested that in a story we ran, too.

“Now, I remember you, Shirley. You came to see me in the newsroom. You said you were frustrated the police didn’t seem to be looking that hard into your grandson’s case and you wanted us to do that.”

I think back and hope I treated this woman nicely.

“Yeah, I did. You said newspapers don’t do that kind of work.”

“But I heard about what you’ve been doin’ now as a private investigator. Your last case was a doozy. Read about it in the paper.” She crooks a thumb toward Annette and her son, still talking with his admirers. “Course, there was Chet Waters. Maybe you can do what the cops couldn’t or wouldn’t do.”

“You mean find out what happened that night with your grandson.”

“Yeah. I heard you get paid for doin’ this. I wanna hear how much. I ain’t got a lot. But this is important to me. I loved my grandson. I’m the one who brought him up after his mother gave him to me. He was hangin’ around with a rough crowd in those days. Tryin’ to fit in. Here. Let me show you his picture.”

Shirley reaches for the purse on the seat beside her. The purse is vintage style, off white with a smart clasp on the top, no zippers, something my mother would use. I am guessing Shirley holds onto things. She removes a photo from her wallet and hands it to me.

“I took it at Christmas, the last one we had,” she says.

Lucas Page’s face smiles at me. He’s young, blue-eyed, and with the kind of features that would label him a good-looking guy. His most distinctive is the red hair that’s short on the sides and long enough on the top so it has a bit of curl. But back to that smile. He was happy to pose for his grandmother.

“He was a handsome young man,” I tell Shirley.

She swipes away a tear.

I glance at my mother. She’s interested, of course. The questions are forming in my brain, but this isn’t the time to ask them. Already a parade of people I know have passed by with a wave, a hello, and a curious expression on their faces as they wonder why in the heck my mother and I are talking with this woman. They’re just being nosy New Englanders as usual.

“Shirley, we’re interested, but this isn’t the best place to talk. We need some privacy. How about my mother and I come to your home to talk this over?”

“Yes, your house. Well, you could come to ours if you prefer. We live in Conwell. But it would help us if we could see where you and your grandson lived. I should also tell you that if I’m interested in taking your case, I have to clear it with my boss. Do you know Lin Pierce?” I pause as she nods. “He gets a small cut of whatever I make. So, he has a say.” I register the concern in Shirley’s narrowed eyes. “Don’t worry. He hasn’t turned me down yet.”

“I understand,” she says. “Can’t do it tomorrow. I’m helpin’ out in the kitchen here. Monday mornin’ work for you?”

Ma and I exchange glances.

“Ten, it is. Do you mind if I make a copy of your grandson’s photo with my phone?”

“Go right ahead if it helps.”

I place the photo on the table and remove my cell phone from my bag to take a shot before I hand the photo back to Shirley.

Shirley leaves us after she gives me directions to her house in West Titus. She lives on one of those dead-end dirt roads, hers is the last house, that’s also likely one of the last to be plowed in the winter and impassable at times in the spring because of the mud. But she’s probably one of those people who doesn’t mind because she wants to live out of the way of everybody. I don’t have to worry about road conditions this time of year. The road’s been graded recently she told me.

I wait until Shirley is out of earshot as she moves inside the crowd that’s wandering the fairgrounds. She stops first at the pumpkin display, where Annette and Abe are still hanging out.

“I like her. She’s a little rough around the edges like a lot of the people we meet here,” she says. “But it’s about time we found a new case. It was getting a little boring.”

I smile. My 93-year-old mother is game for a new mystery to solve.

LINK TO WORKING THE BEAT: Starting Jan. 27, you can buy the book in two versions: Kindle and paperback. Here’s the link: mybook.to/workingthebeat And thank you if you do.