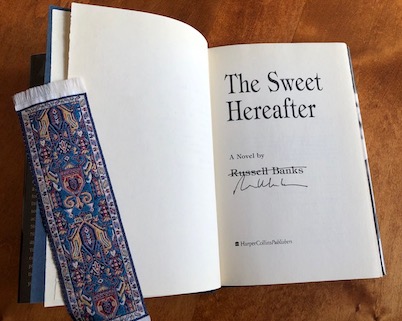 Russell Banks, who died Jan. 7 at age 82, is one of the authors who inspired me to read most of what he had written as well as write my own books. He is also the only famous author I’ve actually met thus far, certainly a more memorable experience for me than him I’m sure.

First, let me tell you some about Banks. He was the author of 14 novels, plus works of nonfiction, books of poetry and short stories. His writing typically reflects the working-class upbringing he had in Massachusetts and New Hampshire. Often they involved tragedies and difficulties people face. Two novels were made into feature films, The Sweet Hereafter and Affliction. Two novels, Continental Drift and Cloudsplitter were nominated for Pulitzers. I have four in my possession, including my personal favorite, The Sweet Hereafter. And that book has a connection to meeting Banks.

In 2004, Banks was at the Brattleboro Literary Festival in Vermont to promote his latest, The Darling with a reading. I went specifically to hear him read. We were living in Worthington, Mass. then. I had an agent and two books written that he couldn’t sell.

At last minute, I grabbed my copy of The Sweet Hereafter in case I could get him to sign it.

The Sweet Hereafter is a grim book about a school bus accident in which fourteen children die and how those living in a small town in Upstate New York respond. Banks was inspired by a similar accident in South Texas.

The story is told by four characters: Dolores Driscoll, the woman who drove the bus and survived; Billy Ansel, who lost his two children in the accident; Mitchell Stephens, an ambulance-chasing lawyer; and Nichole Burnell, a teen who survives but can no longer walk. Banks did an expert job capturing small-town life complete with its dark secrets. Didn’t I say he inspired me?

That Saturday, Banks was on stage in an auditorium as he spoke and read from The Darling in an engaging way. The main character is a woman, a ’60s radical who flees to Africa.

After he was done, Banks left the stage and was immediately surrounded by people clutching books for him to sign. I held the first edition hard cover of The Sweet Hereafter I bought for ten bucks as I joined them.

I waited patiently, trying not to groan when one woman presented him with a stack of dog-eared paperbacks. Banks smiled and signed each book without complaint.

I was up next when an eager festival worker rushed down the auditorium’s aisle to inform Banks he was needed right away in the lobby to sign books. Well, there goes my chance I thought. Banks told the woman he would be right there but that I would accompany him. He gestured toward me, “She comes with me.”

Touched by the moment, I followed Banks to the head of the line, where he crossed out his printed name on the title page of The Sweet Hereafter and signed below it. (You can see it in the photo above.)  I told him how much I loved the book and thanked him.

I read that novel at least twice more after that, and during each one, I recall the brief moment I connected with the author. Thank you, Russell Banks.