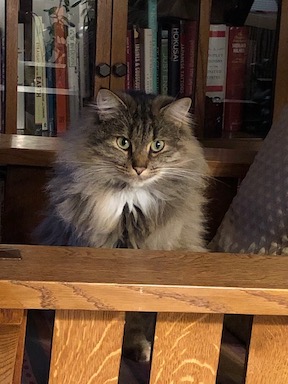 I am talking about what we call the animals who live with us. A few arrived with names. The others didn’t. So what do you choose to name them? That’s the fun dilemma.

We try to come up with something that fits their personality and is fun to say like Roxanne, which was the name of calico we had. Of course, I was thinking of that song by Sting, and I often found myself singing her name although not as well as him. Roxanne was an extremely smart cat who figured out that if she jumped on the latched door handle in the kitchen, she could let herself inside. We also had a cat we named Phoebe.

Cats, Amos and Lewis, already had their names, so kept them. When we adopted Two at a shelter in Taos, she came with the name Dusty, which we didn’t like. But we were stumped, so we named her Two after the best two cats we’ve owned — Amos and Lewis. Two, or Two Two or Princess Two Two, as we was often called her, lived with us for 11 years, until last Christmas.

One of Two’s favorite perches was a gate Hank built for our front yard in Taos.

We’ve had two dogs. Sheena’s previous owners, actually neighbors, left her tied up and moved away. She managed to break away and find us. Sheena was not a name we would have chosen, but she sure responded to it, so we reluctantly kept it. A black Lab, she was a wonderful companion and it turned out, the inspiration for a character in an as-yet-to-be published book, The Sacred Dog. But I gave her a more suitable name.

The next dog, a golden Lab mutt, that came after her was named Sadie, which fit her sweet disposition.

Our most recent adoption is a cat who found her way to outside a friend’s home. I saw a post on Facebook that she was looking for someone to take her in since she already had a cat. We were ready after nearly a year to do that. She appears to have a lot of Maine Coon in her. We are guessing she was at one time an inside cat but was dumped. Perhaps her owners couldn’t afford to take care of her any longer. Understandably, it’s been an adjustment for her after being on the lam for a few months, but she has made great progress in the couple of weeks we’ve had her.

So. about her name. Hank and I went through many before deciding on Stella. We wanted to find something from Maine to call her but couldn’t. Personally, I like giving human names to our animals.

Yes, I was inspired by “A Streetcar Named Desire,” and I feel I channel Marlon Brando when I call her, well, in a lot more loving and softer version, or the poor cat would be frightened. Right now, she’s sleeping in my office as I write this. Aw, Stella.

And if you’re curious here’s the way Marlon said it: https://www.youtube.com/watch?v=S1A0p0F_iH8