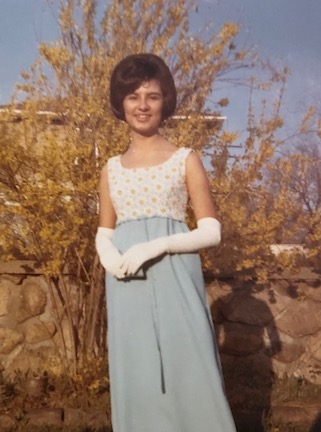 I will admit I was a socially awkward teenager. My solution to becoming a popular one was to learn hypnotism, and while the end result didn’t make that happen, it was an interesting experience. Plus, it had an unexpected benefit in college. Read on.

To backtrack, I lived a very sheltered life as a kid, which looking back meant I read a lot, used my imagination, and got good grades in school. But I never had a boyfriend although I did have my crushes. I was never part of the so-called in-crowd or even invited to a party. I had to wrangle a date for the junior and senior proms. (Yes, that’s me dolled up for my Junior Prom. I got to go thanks to one of my best friends’ brother.) I did have close friends I remember fondly, but truthfully, they were outsiders like me.

At our town’s Millicent Library, I discovered a book that instructed the reader how to perform hypnosis. Don’t ask me the title. It was a long time ago. But my hope was that it would improve my standing in high school.

I needed a willing subject to practice hypnotism. So I enlisted my kid sister, who was seven years younger and a willing participant.

Upstairs in our bedroom, I swung a shiny, golden pendant in front of her face. I spoke those oh-familiar commands in a sotto voce, willing her to go to sleep, a deep sleep. Her eyes indeed got heavy.

Yes, it worked. My sister did go under.

I even tested my sister to see if she was faking, but she wasn’t. We went through the usual tricks you see on stage, like making her believe she was drinking water when she wasn’t or that she felt hot or cold. Remarkable.

A couple of times, I took the experiment further. I was inspired by the story of the Irish woman, Bridey Murphy, who delved into her past lives when she was hypnotized. So, I asked my sister to tell me about previous life experiences. We went back a few. My sister wasn’t rich or famous in any of them, but she told me enough details so I believed she was being genuine.

I hypnotized her a few times and dropped the experiment. Frankly, our parents wouldn’t have been happy if they knew what I was doing.

Ah, but the story isn’t over. Years later, when I was a sophomore in college, I got stuck taking philosophy 101 because it was general requirement. Ugh, I quickly realized I didn’t have a head for that kind of thinking. I felt I was in big trouble.

But then one day in class, the professor started talking about the possibility of reincarnation. Finally, here was something I got. I raised my hand.

I told the prof about hypnotizing my sister and taking her to past lives. He was not only interested, he stopped me after class. He told me if I gave a lecture about my experience to his classes, I could skip all of the exams and papers. I would get an A for the course.

It was an offer I couldn’t refuse and certainly the easiest A that I ever earned.

There have been a few times when friends heard about this story that they wanted me to hypnotize them. Each was a failed attempt, however. Perhaps the willing subjects didn’t believe I could do it or unlike my kid sister, they didn’t trust me.

And now that I have your attention, I want to note this bookish girl became a bookish woman. During the past several months my publisher darkstroke books has released two: Following the Lead, no. 6 in my Isabel Long Mystery Series, and The Sacred Dog, a dark thriller set in my favorite setting, rural New England. Here are the links: https://mybook.to/followingthelead and https://mybook.to/thesacreddog