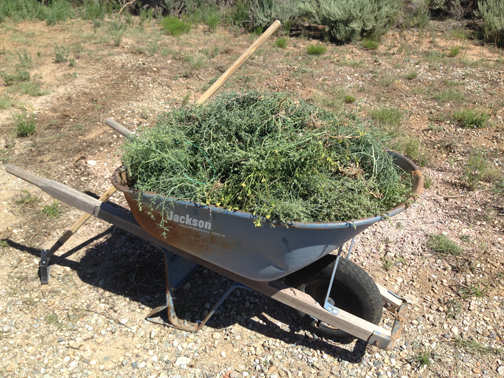 I’ve been on a tear, really, about Russian thistle aka tumbleweed. First a little history: long before most of us were living in Northern New Mexico, sheep were allowed to overgraze. Prairie grass vanished. Sagebrush and invasive weeds such as tumbleweed, which has its origins in Russia, took over.

My mission is to eradicate it from our piece of property at least.

When tumbleweed is new, it is a green, spindly thing that grows into a thorny plant that is good for nothing. If allowed to grow, dry, and tumble, it spreads seeds like nobody’s business. I want to get to it before that happens.

Friends back East said they were charmed by tumbleweeds. They’ve seen pictures of them roll. Sometimes they do it in huge quantities that can clog a road. I say ugh.

For me it’s a constant battle, at least during the summer, to keep that damn plant from growing in our open spaces and along our parts of the road. So for the past few days, I’ve been out there, digging it up and chucking it in the open land across the road where it will die. It is not pleasant work. The maturing plants are scratchy. There is no way I can get all of the roots. But I do my best. Do they seem less each year? I honestly couldn’t tell you.

It’s a lot like revising fiction, although that is a more pleasurable task. I’ve set aside the next adult novel that is to be published to rest for three weeks and returned to my middle grade fiction, The Twin Jinn series. After a few years, I am taking a look at the first one, in which I introduce the family of genies hiding out in a traveling carnival. (I am planning to publish The Twin Jinn at Happy Jack’s Carnival of Mysteries this fall.) Enough time has passed that I read it with fresh eyes. As a result, I saw parts I want to change. I wouldn’t necessarily call it bad stuff, but I found sections to expand and contract. Words to eliminate or change. Points of view. Certainly, this task is more fun than yanking tumbleweeds under the hot New Mexican sun.

Another task this week: Getting ready for my solo reading Friday, July 8. I’ve chosen the short sections I will read. I want to give those who attend a flavor of the three-day bash. For those living nearby, it’s 6-8 p.m. at SOMOS of Taos on Civic Plaza Drive. I will have books for sale: $12 gets you a magic carpet ride back to the early seventies.

ABOUT THE PHOTO ABOVE: A wheelbarrow filled with those damn tumbleweeds.