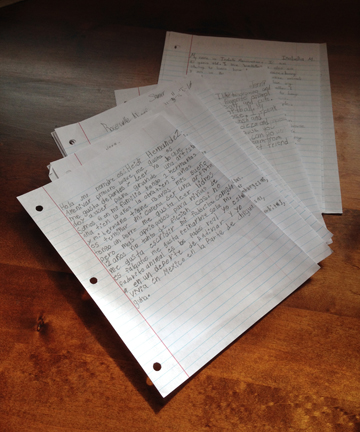 I have added another gig: teaching creative writing to fifth-graders. It’s part of the Visiting Artists Program at the Taos municipal schools.

Others in the program are bringing what they do creatively in real life into the district’s classrooms. I work with Kathy Serna’s twenty fifth-graders at Ranchos de Taos Elementary School. My focus is on flash fiction, which I believe fits their writing level and the time I will spend with them — one or two hours a week.

I remember a similar opportunity I had when I was a fifth-grader. That year, a few children from each elementary school in my town — there were several then — attended an enrichment program on Wednesday afternoons. We were taught advanced science and creative writing.

The science was fine. Creative writing, taught by Mr. Graves, was definitely my favorite. I learned about expressing myself using similes, metaphors, and other figures of speech. At that early age I was inspired to do what I have done as an adult — write creatively.

I hope I can do the same for these kids.

My first day was last week. They got to know a bit about me, and I asked them to tell me about themselves via a writing assignment. (I admit I will have to work hard to remember everyone’s names given the short amount of time I have in the room.) I explained about flash fiction and how we will be publishing what they write in a magazine format. We read samples together.

On Thursday, I let them choose a photo  from the pile I cut from magazines. Tell me a story, I asked them. They had pictures of people and animals in a variety of locations. The animals, especially the coyotes were popular. One boy flipped his page over and decided to write about a couch in an ad. It’s a magic couch, he told me.

This time they worked on the computer although some preferred to write their first draft in longhand.

They are a great group of students, eager and polite. Several are bilingual or their primary language is Spanish. Their teacher called them “the best of the best.” I believe Kathy. She’s also a dedicated teacher. I am learning from her as well, like when she said to talk and read with them at the rug area rather than have them sit at their desks. You can lose them there.

I am also eager to learn what these students will teach me about writing.

On Tuesday, the students worked more on their stories after a brief lesson on onomatopoeia. (You know words that sound like the noise they make, like crunch and howl.) A group of girls are including each other in their stories. The same goes for a pair of boys. Kathy and I help the students as needed.

The hour flew by. Kathy told the students they could get together and share their writing with each other. They gathered in the back corner of the room, chatting excitedly when I left. Now that made me feel good.

ABOUT THE PHOTO ABOVE: The students wrote about themselves on those sheets of paper.