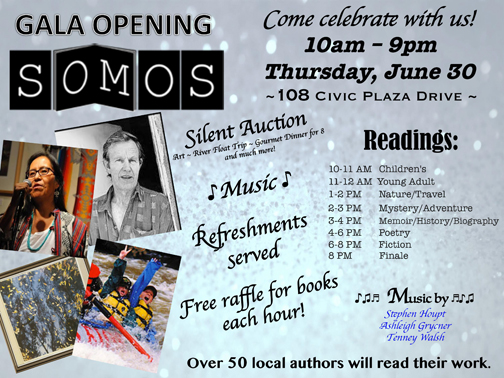 I’m a nut about preparation when it comes to speaking in public. When I was the managing editor of a newspaper, I did it frequently — quizzing candidates at political forums and emceeing the paper’s yearly awards event. Then there are the Q&A’s I’ve done in Taos with visiting authors and writers-in-residence.

I do my research and plan my questions. Then I print them on paper in a large font, say 22 or 24. And I practice.

I’m doing two readings for SOMOS on Thursday, June 30. The lit group of Taos is celebrating its new headquarters aka salon with a marathon reading of about 50 authors from 10 a.m. to 9 p.m. The evening will end with noted author John Nichols.

In the morning, Teresa Dovalpage, my collaborator and translator, and I will read from the first book in our los Primos bilingual series — the one about the magic fish. We’ve done a few of these. Teresa will bring her large, stuffed dog and I have posters of the illustrations my son Ezra did of the cousins (los primos) and their grandfather (abuelo).

I return in the evening for the adult fiction portion of the event. I will read from Peace, Love, and You Know What. Each author will have the floor for 10 minutes.

So what to read? My novel moves awfully fast and a lot happens. So I chose a short chapter, called The Hard Truth. The three-day bash hasn’t started. The characters have pulled three all-nighters in a row for finals. One of them is a few credits shy but is figuring a way to fake his graduation so he doesn’t disappoint his mother. We meet Lenora. There’s lots of dialogue and humor.

My plan is to give the listeners a taste and hopefully entice them to return a week later, July 8, for my solo reading. (Yes, I did write a short intro with big lettering.)

I’ve practiced a few times this week, using the timer on my phone. It’s well under 10 minutes. I think it will work.

David’s show is called “You Kids Get Off My Lawn.” There’s some irony there since there is no lawn at KNCE. The station, located inside an Airstream, is surrounded by sagebrush and located next to a brewery.

This time the shoe will be on the other foot, as my mother used to say. I have no idea what David will ask me and that’s just fine.

Lastly, here is the link to my novel on Amazon. Thanks readers!  Peace, Love & You Know What

PHOTO ABOVE: That’s the poster for the SOMOS open house June 30.