Teresa Dovalpage and I have a bit of history. When I lived in Taos, NM, I took her Spanish I class at the university branch where she was a professor. Originally from Cuba, she was a lively prof, and shortly after that she started doing freelance writing in Spanish and English for The Taos News, where I was the editor-in-chief. We became good friends, and I will admit Teresa, who had already written many books, inspired me to stray from writing literary fiction to mysteries. Since then, she has left Taos to work as a professor in the southern part of New Mexico, and I moved east to Western Mass. But we still keep in touch and, yeah, I have read and enjoyed all of her books, including her most recent Death Comes in through the Kitchen. Here. I will let her take over and tell you about her character, Marlene Martínez.

Thank you, Joan, for inviting me to your virtual home! 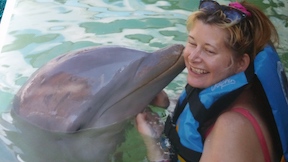 Teresa Dovalpage on the cruise that inspired her novel.

I would like to introduce your readers to Marlene Martínez, a character that appeared for the first time in my culinary mystery Death Comes in through the Kitchen (Soho Crime, 2018). The story takes place in 2003, when Marlene is still a young lieutenant in Cuba’s police force:

“She was around twenty-five years old and very tall, with short brown hair and stern gray eyes. Despite her youth, she looked imposing and severe.”

While writing that book, I encountered a problem: I didn’t have the slightest idea of how the Cuban law enforcement operates. So I did what I had learned while working for Joan at The Taos News. I found a source and got all the details. I interviewed a former Cuban cop now settled in Miami who provided me with the information needed to build both character and setting: the way police stations are organized, the fact that they are called “unidades”—that’s why I kept the term in Spanish; using “units” didn’t sound right in English—, and the scanty resources they have at their disposal.

Marlene, however, had mostly a supporting role in this book. The real star was Padrino, a detective turned Santeria practitioner and Marlene’s former mentor, who in the end solves the case.

A similar situation happened in my second mystery, Queen of Bones (Soho Crime, 2019).

But by the third book in the series, Marlene was tired of playing second fiddle. And she let it be known. She is quite opinionated, let me tell you! She wanted, and needed, her very own book. And it so happened that the character followed, with some variations, my source’s real-life journey. Marlene’s next appearance was in the novella Death of a Telenovela Star (Soho Crime, 2020). By then, in 2018, she is living in Miami and owns a bakery called La Bakería Cubana.

Death of a Telenovela Star is based on a Caribbean cruise that my husband and I took three years ago, where I witnessed some mischief that provided the initial chispa, that spark that books need to be born into the world. The story is set on a week-long cruise to Mexico and the Caribbean that Marlene has booked as a quinceañera present for her niece Sarita.

“Aboard the North Star were five thousand travelers and one open bar. What could be expected from such a crowd but shenanigans? That’s what Marlene Martínez thought as she looked around her with suspicion. With so many passengers crammed onto the one-thousand-foot boat, something bad was bound to happen.

Her grandfather, bless his soul, used to say, “Somewhere, something bad is happening to somebody right now.” Years ago, Marlene had laughed at his unabashed pessimism, but now, watching from her lounge chair the noisy throng waiting by the pool for their cabins to be ready, she couldn’t avoid a sense of dread.”

When Sarita discovers that a Cuban telenovela star, Carloalberto, is also aboard, and starts obsessing about him, Marlene realizes there’s going to be trouble.

And it will be up to her to keep it at bay.

I hope you enjoy the book!

ABOUT THE AUTHOR: Teresa Dovalpage was born in Havana and now lives in Hobbs, where she is a Spanish and ESL professor at New Mexico Junior College. She has a PhD in Hispanic Literature by the University of New Mexico and has published eleven novels and three collections of short stories. Once in a while she delves into theater. Her plays La Hija de La Llorona and Hasta que el mortgage nos separe (published in Teatro Latino, 2019) have been staged by Aguijón Theater in Chicago.

Death of a Telenovela Star: