As the French president said, “C’est une horreur.” The recent attack on innocent people in Paris is indeed sheer horror. In response, many of my friends have posted photos and memories of the city. They’ve opted for the French flag super-imposed over their profile photos on Facebook. I have my own memories, but I will offer this one. 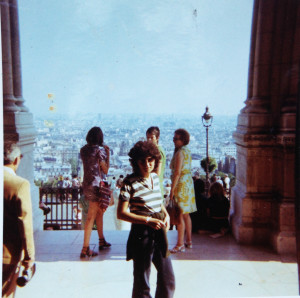 A photo of me in Paris.

I was in the city a long time ago, with the man who would later be my first husband. We were hitching that summer around Europe and for a time ended up in Paris. We were macrobiotic then, an admittedly strict regime of brown rice and vegetables that worked because we were also low on money.

So when we arrived in Paris, we tried to get a job in one of the several macrobiotic restaurants there. (We were living in a small hotel and cooking food over a camp stove along the Seine. Yes, we were a bit fanatical.) We kept striking out until we arrived at a macrobiotic restaurant run by a Vietnamese man. He told us he didn’t need workers but we could live for free in an apartment a couple of floors above the restaurant.

It was a tiny place, which had a kitchen, with a bidet, and some furniture. We shared the toilet in the hallway — a filthy closet where you stood to do your business.

That’s where we stayed the weeks we were in Paris. By day we visited all of the city’s quarters, museums and historical spots. We met interesting people. Another group of travelers in the same predicament joined us in the apartment. (When we later met up with them by accident in London, they returned the favor. But that’s another lucky traveler story.) One night we dug into our money and ate at the restaurant.

I marvel still at the generosity of the Parisian who gave us a place to stay and asked for nothing in return. I wish the city and its people peace.

PHOTO ABOVE: That’s the view on my neighborhood walk. The Sangre de Cristo Mountains with a bit of snow at the top are in the background. If I squint, I can make believe the sage is an ocean.