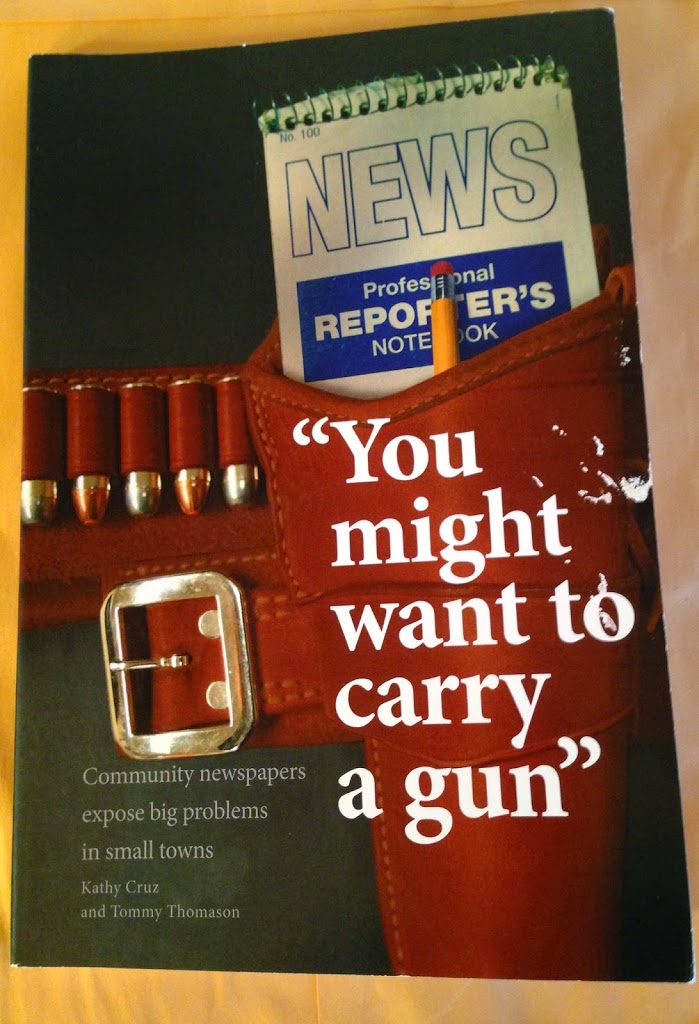 That’s the name of a book written about what can happen when community newspapers expose big problems in small towns. Journalists Kathy Cruz and Tommy Thomason created a slim but engaging book, in which they tell the stories of small town journalists, who risked the scorn of townspeople, and in some instances, had threats made on their lives. Why? Because they believe it is the public’s right to know what’s going on in their communities.

Yes, some of the journalist took to carrying guns. They had good reason.

I picked up the book at the National Newspaper Association’s annual conference in San Antonio this weekend. There, several of the journalists profiled participated in a panel discussion about investigative reporting.

I’m not talking about big papers that can afford to have one of their reporters devote weeks or even months to a story. These small newspapers have a few reporters on staff who typically report on local boards, events, and people. But then, they find something in their community that needs to be uncovered. And, they do that while still reporting on local boards, events, and people.

They own or work for papers many of us have never heard of such as The Timberjay in Minnesota, The Yancey County News in North Carolina; The Concordia Sentinel in Ferriday; and The Hood County News inTexas.

These journalists have taken on corrupt sheriffs and other officials, a corporate takeover of a school system, a charity, a cult, the list goes on. They did it by asking tough questions and accessing public records — and not stopping when they were told no.

I am the managing editor of a small weekly community newspaper. Previously, I was a reporter and an editor for a daily. I often hear people say we should report on “good” news instead of “bad” for a change. I say politely there isn’t good or bad news. It is simply news. I have taken phone calls and had visits from people angry with our coverage. My only regret is if we make an error, and we correct those right away.

Probably the worst threat I’ve received was from someone in law enforcement who said “I can forgive but I can never forget.” Of course, some businesses or institutions pull their advertisement for a time or threaten to do it. My husband sometimes comments he’s surprised people haven’t come to our house. But carry a gun? Nah.

Here’s one story from the book. Samantha Swindler and Adam Sulfridge, former managing editor and reporter, respectively, of a Kentucky paper, uncovered the illegal activities of the sheriff. He later pleaded guilty to such crimes as extortion, money laundering and allowing drug traffickers to have their way if they supplied him. Swindler and Sulfridge were threatened with bodily harm. Both took classes so they could carry concealed guns. It was a good thing they did.

These journalists have brought about change and earned awards, in a few cases even a Pulitzer. But often there was a cost. Businesses stopped advertising. People in their communities were just plain mean instead of grateful. They didn’t like to know, I suppose, their town wasn’t perfect.

But thank goodness for brave journalists. Read about several in this book.

Want your own copy? Buy if for $15 at www.kendallhunt.com/Thomason_Cruz/

One thought on “You Might Want to Carry a Gun”