Two flights between Santa Fe and Boston to visit family last week gave me the opportunity for uninterrupted reading. I often print a draft of a work in progress for the plane, but this time I decided to read what somebody else wrote.

At the recommendation of a friend I tried Denis Johnson’s Tree of Smoke but put it down after 150 pages or so. Yes, it won him the National Book Award but it wasn’t for me. 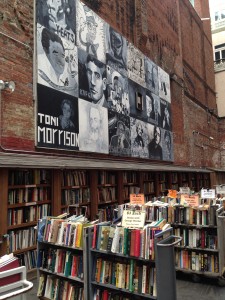 Luckily, I brought along Ken Kesey’s One Flew Over the Cuckoo’s Nest, which I hadn’t read since I bought the book in 2001. This was my third reading actually and I wasn’t disappointed. Kesey created great characters like Randal Patrick McMurphy, who announces during his grand entrance: “Damn, what a sorry-looking outfit. You boys don’t look so crazy to me. Which one of you claims to be the craziest? Which one is the biggest loony? … Who’s the bull goose loony here?”

Then, there is Nurse Ratched, who can’t tolerate McMurphy’s boisterous and conniving ways, and Chief Bromden, who tells this story, plus the cast of characters who live and work on this ward. I rank One Flew Over the Cuckoo’s Nest high in my top 25.

This visit continued its book theme with a visit to a public library in a Boston suburb. While in Boston proper, I stopped at three used book stores, including the Brattle Book Shop, with its mural of literary heavy-hitters overlooking its sale lot. I could have spent hours in each store but I didn’t have enough time this visit. Instead I walked the aisles and marveled at the stacks of books, like the good one by Ken Kesey I read on the plane.

One thought on “One Flew Over”