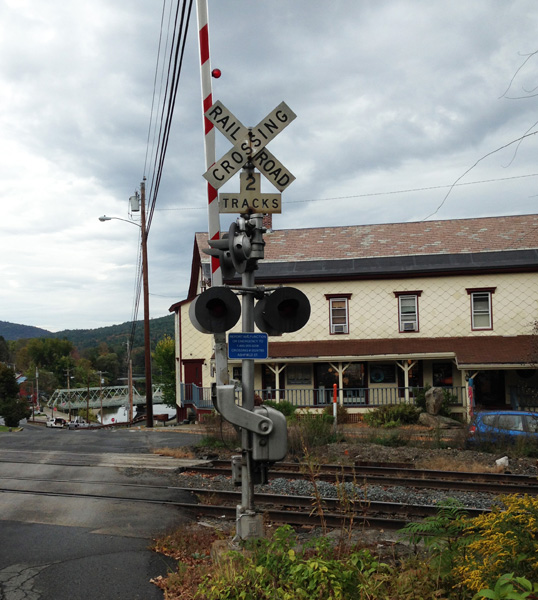 I have trains on the brain since we live within hearing distance of one. Actually, many on this commercial line pass each day and night across from the Deerfield River in Western Mass. That and the traffic on Route 2 are part of my new soundtrack.

A field easily the size of a football stadium, a strand of forest, and a wide river separate the place we’re renting from the tracks.

Without any manmade buildings in the way, the sounds travel easily to our apartment. They range from the waank-waank-waank-waank of a train’s horn to the long ch-ch-ch and squeals its wheels make on the rails. Its rumble and roar. Earlier this summer, explosions shook the back windows a bit, likely for construction along the line.

(The trains in our neck of the woods are strictly commercial although there is a passenger line that stops at the John W. Olver Transit Center in Greenfield, the first net-zero station in the U.S. The trains run to Montreal and New York City, which present intriguing opportunities.)

Hank’s family has a strong connection to trains. His grandfather and father worked for Penn Central, a brother too. Hank had other plans.

What’s my link to trains? I certainly have heard enough folk and blues songs that romanticize this mode of transportation. Yes, I have ridden so very many from subways and trolleys to light rails and passenger trains here and in Europe. And now I live and hear them on a daily basis.

I bet you have your own train stories. Today I offer a few of mine.

In the first, a dwarf barged into my car while I was asleep on a train in Switzerland. He yelled obscenities and jumped on top of me before I could throw him out. In Southern France, the train stopped so briefly, I had to run to catch the last car, a flatbed, where I tossed my backpack and myself safely on board.

There was the memorable time we were stuck for hours on the tracks in Connecticut on New Year’s Eve, and the cops had to come aboard to subdue the drunks heading to Times Square.

How about when one of the newspaper’s homeless street hawkers joined the staff for a ride on the scenic railroad that runs in Northern New Mexico and Southern Colorado? He kept to himself although my co-workers tried to engage him, and I was amused to see load up his pack with food from the buffet.

I had forgotten these stories until I heard the train move through our backyard. Waank-waank-waank. Ch-ch-ch. Squeal. Rumble and roar.

ABOUT THE PHOTO ABOVE: This is a railroad crossing farther down the line on the Buckland side above the Shelburne Falls village.

ONE MORE THING: Here is a link for my books for sale on Amazon, including my most recent, The Sweet Spot, set in Western Mass. They’re not free, but they are for the taking. Check them out: https://www.amazon.com/Joan-Livingston/e/B01E1HKIDG