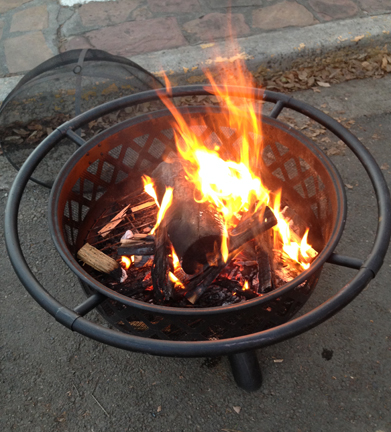 Okay, so I’ve told you about two characters in The Sweet Spot: an old coot and one impertinent woman. Benny and Leona offer a bit of comic relief to this novel, which will be released in January. Now, let me tell you about the stranger who moves next door.

His name is Harlan Doyle. Edie, the book’s main character, notices him at the Memorial Day ceremony held at the town common. Besides being the only non-resident there, Harlan has deep scars on his face his sunglasses can’t hide. It’s obvious from the way he stands he was badly hurt one time.

So what’s Harlan doing in Conwell? He’s here for his fresh start. But he does have a connection to this hilltown. He is moving into his grandmother’s house, which is next door to Edie, her father and aunt. They live on Doyle Road, so you know the family goes way back. His grandmother died three years earlier and the house, which was left empty, needs a lot of work. Harlan is a woodworker, so he can handle it.

Harlan has had his rough times. He acted badly after a failed marriage, but as he says, he at least had the anonymity of the city. He didn’t drink, do drugs, or bother his ex-wife in a nosy little town. He had to recover from a serious accident. But the Harlan we meet has gotten over that. He’s a kind and rather shy man who is amused by his neighbors and what happens in town. He is envious of the close relationship Edie has with her crusty so-and-so of a father.

Of course, his neighbors and townspeople are curious about him as well.

He has a key role in this novel’s story.

Writing about Harlan was also a chance for me to demonstrate my knowledge of woodworking and building that I acquired via osmosis. My husband, Hank, is a master woodworker. When I showed him the book, he said I got those parts just right.

Here’s an excerpt. Edie welcomes Harlan to the neighborhood. He’s living in a tent outside because his grandmother’s house is uninhabitable.

“Hey, there,” she called to Harlan, and when she was closer, “My name’s Edie St. Claire. I’m your next-door neighbor.”

Harlan pulled himself upright. His bad leg felt dead and useless, so he punched it a bit to get it moving, feeling embarrassed. Edie kept smiling as if she didn’t notice. He was on his feet and stretching himself upright. He nodded.

She stood at the bottom of the steps. She held something wrapped in aluminum foil.

“I know who you are. Pop told me about you. So did my Aunt Leona. I hear your truck go by. I brought you something.” Her hand swung forward. “This is for you. Banana bread. I made it myself this morning. It has real walnuts.”

Feeling too tall and awkward standing on the porch above this woman, he limped down the steps. He took the bread. It was still warm.

“That was awfully nice of you,” he told her.

Edie glanced around. Harlan saw what she saw.

“Work with wood. What’s that mean?”

“Sometimes.” He grinned. “My tools are supposed to get here soon.”

Her head tipped to one side.

“You gonna sell the house when you’re done?”

“No. I’m planning to live here for good.”

“For good? Really? People usually fix up these old places to make money.”

She came nearer. Her blue eyes opened wider. He felt himself smile.

“Not me. This house belonged to my family.”

She laughed as she gestured toward the tent.

“You’d better hurry up then. Winter always comes faster around here than we think, and your tent’s not gonna keep you very warm.”

He nodded. Edie only came up to his shoulders. She didn’t seem to mind being this close to a man she just met.

“I was going to go into town to find a roofer. I don’t have a phone yet. I thought I’d use the payphone near the store.” He slapped at his right thigh. “Bum leg. It’d be tough for me going up and down a ladder carrying bundles of shingles.”

She studied his leg and then his face.

“Were you in the war?” she asked quietly. “Is that how it happened?”

He glanced away for a moment. Her eyes were still on him.

“You got hurt real bad. Sorry it happened.” She paused. “I know someone who can help you. His name’s Walker St. Claire. He’s my brother-in-law. He does this kinda work, and anyone who hires him gets his money’s worth. He could help you find a plumber and electrician, too, if you need ’em. You got a paper and pencil? I can give you his number.”

Harlan stumbled forward, dragging his leg, impatient at his clumsiness, but he made it to the door first, so he could open it for her. The kitchen was a large, square room with wooden cabinets and six-over-six paned windows that would let in natural light once their glass was washed. This was the first room he cleaned. The appliances were long gone, except for an iron cook stove in one corner. The plumbing was missing beneath the sink, but its porcelain was in decent shape. He already fixed the leg on the kitchen table. That and a chair he found in the attic were the only pieces of furniture in the room. He set the bread on the table.

“I liked your grandmother an awful lot,” Edie told him. “I work at my in-laws’ store. I used to bring her groceries on Saturdays. It was the day she baked, and she always gave me something to take home.”

“I’m afraid I didn’t know her very well. I only came here a few times when I was a boy.”

“That’s a shame. Elmira was a wonderful woman, and she was awfully kind to us. I remember she made us all dinner when my mother died. I still have the pink blanket she crocheted for Amber after she was born. Amber’s my little girl.”

“Whenever your grandmother hired Pop to help around the house, she made sure he completely finished the job before she paid him. She’d give it a close inspection. She knew my father all right. She’d say, ‘Alban, don’t ever try to fool an old lady, at least not this old lady’.” Edie raised a finger. “I suggest you do the same, Harlan Doyle. I love my Pop, but he’s bit of a rascal, if you get what I mean.”

He handed her a paper and a stubby pencil from the counter. He watched her write.

ABOUT THE PHOTO ABOVE: One of the bonfires lit at a holiday event in Taos Saturday: Bonfires on Bent Street.