My friend Andy told me about the author Larry Brown, who was a firefighter in Oxford, Mississippi before he worked as a writer.

Brown wasn’t an overnight success. I once read an interview in which he said he finished hundreds of short stories before finally getting one published in a biker magazine. He wrote a bunch of bad early novels including one about a man-eating bear in Yellowstone.

The first book I read was Father and Son, which I found in a used bookstore in the Adirondacks. Here’s the plot: a Southern guy gets out of prison, one of those bad to the bone types, and for five days terrorizes the people he knows. Having lived much of my life in a one-store, one-church, one-bar town, I was fixated although I’ve never met anyone so unsalvageable as Glen, the main character.

Brown told the story well and so I read others: short story collections and novels. He wrote about men and women with big problems. They drink. They cheat. They hurt each other. They do wild, unpredictable things. They’re poor. 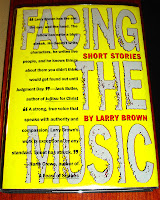 But then there was Brown’s brand of dark, country humor. Here’s how he began the short story, Big Bad Love. “My dog died. I went out there in the yard and looked at him and there he was, dead as a hammer. Boy, I hated it. I knew I’d have to look around and see about a shovel.”

I didn’t like his last novel, “A Miracle of Catfish.” But then again, he died of a heart attack in 2004 before it was finished. He was 53. It was released as a novel in progress. Four hundred and fifty-four pages. I would have liked to have read the novel after Brown worked at it more.

I own everything Brown published. I feel fortunate to have two he signed. One was his first, Facing the Music, a collection of short stories. I can imagine his pleasure seeing his writing in book form and signing his name in pen because someone asked.