I have big feet. How big you ask? Size 11 1/2 women’s. I stopped growing late in high school. My feet kept going, long and skinny, through my twenties from 9 to 10 to what they are now. Trying to find nice shoes is usually an exercise in futility.

(I am also cursed — or blessed — with longer second toes. I believe I could fit into a size 11 if they were regular size but they aren’t. People try to make me feel better by saying it’s a sign I am descended from royalty. That would be nice but, alas, it isn’t true.)

For years I was forced to wear men’s shoes and sneakers but as my feet are also narrow, they never fit well. I recall a shoe salesman smirking when I asked for a men’s black dress shoe in 10 1/2 narrow. He made a stupid remark. I walked out. Once in Boston’s Chinatown, I tried to buy black, cotton shoes and was told “no woman should have feet that big.” Ouch.

So buying shoes became a dreaded purchase. Stores would claim they had size 11 shoes and over but they weren’t designed well. I was better off with men’s.

Ah, but things turned around a bit when I found shoes made in Europe. I remember the grand feeling of walking out of a store wearing comfortable shoes that were pretty. They’re pricy but worth it. I also found 11 1/2 women’s sneakers, narrow, in a sporting goods store and sandals. 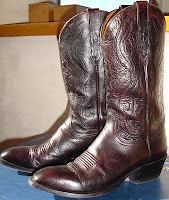 This week I decided to treat myself to vintage cowboy boots. Well, they would have to be cowboy and not cowgirl boots because I doubt I would find a women’s size I could wear. I told Lindsey at Horse Feathers in Taos about my long, skinny feet. I tried several pairs but most were too wide and floppy. With his wry, Western humor, Lindsey kept going through the store’s selection of boots until he found a pair of Luccheses with brown tooled leather. Nice heel. A 9 1/2 D. Who would have thought?

The fit wasn’t perfect but it was pretty good. Lindsey said to take the boots home for two days, wear them with thick socks — I had on thin dress socks — and then come back. I did as he said and also added an arch support. I went back Saturday to happily complete the purchase and that night, gave those boots a good polish.