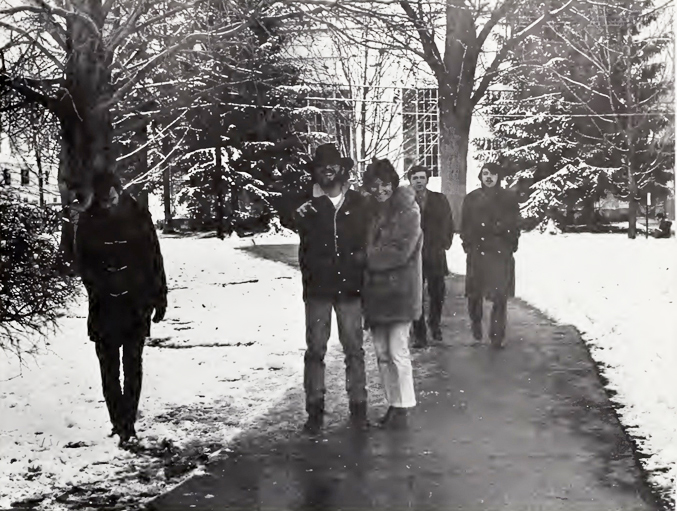 Well, I suppose it is if you consider smoking pot, dropping acid, and protesting a senseless war as crimes. Throw in skipping class for no good reason. But on a recent road trip Back East I visited my alma mater Bridgewater State University, the inspired setting for my novel Peace, Love, and You Know What. 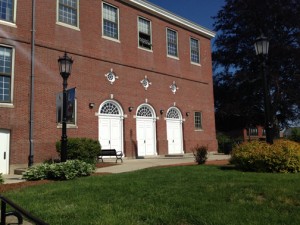 Front of the auditorium at Boyden Hall. The lit mag was located in the mezzanine, where the window is open.

I hadn’t been back since I graduated in 1972. Then, Bridgewater State College was a cluster of traditional brick buildings, except for a newly opened dorm. The college, now officially a university, has grown immensely with new buildings. The old ones have been repurposed. Its academic offerings likewise have expanded. A commuter rail, which I took, links the school to Boston.

But that’s not why I went. I was on a research mission in that I wanted to see the buildings and places I used in my novel.

A caveat: Peace, Love, and You Know What is a piece of fiction. It is not a memoir. Like other authors, I used what I experienced and had my way with it. That included the college, which I call Westbridge State in the novel. 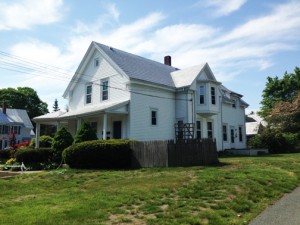 On a fine May day, I walked to 221 Summer Street, the inspiration for the crash pad, 221 Winter Street, in the novel. From the amount of mailboxes I suspect it is still rented to students, but the building is far better maintained, at least from the exterior. So is the apartment house on Broad Street, the infamous Brown House where I once partied and later lived. Like a lot of buildings, it had new siding. Alas, the cinder block apartment complex AKA the Roach Motel was torn down long ago, I was told.

I visited Carver’s Pond, used in the book for the softball game between the rival Winter Street and Roach Motel hippie tribes. As a student, I sought refuge here even in the winter. Now it’s a park with walking trails. 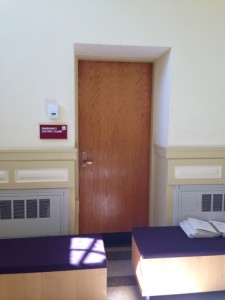 The former newspaper office now used as a closet.

The campus was empty since graduation was held earlier that month. As I wrote, many of the older buildings, including the dorm where I lived two years, have new lives. I managed to sneak into the auditorium. The closet of an office, once a ticket-box, used for the student newspaper is indeed now a closet. I couldn’t get access to the mezzanine where the lit magazine was located. (I was once the editor.) The commuter lounge, a frequent gathering place, was long gone. I smile thinking about the times my group hung around that building, up to no good, according to the school’s administration. 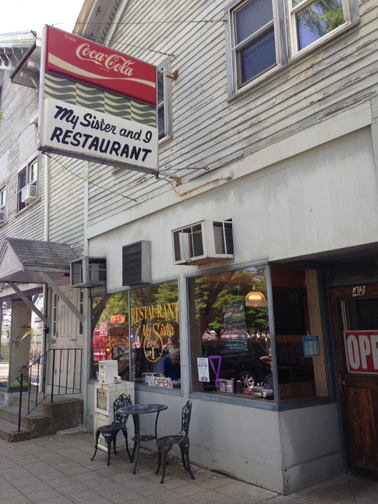 The restaurant was called Buddy’s when I went to school. It was inspiration for Ray’s in the book.

I headed downtown, which surprisingly hasn’t fared as well as campus, with empty storefronts and funky businesses. The coffee shop — Buddy’s when I was there, Ray’s in the book — still exists. It’s now called My Sister and I. The interior has been changed to give more seating. My friends and I spent countless hours there drinking bad coffee and talking. I ate lunch for old times sake.

I did stop at the alum office. The friendly women working there showed me the yearbooks from the time I was in school. I started with the one from 1970. The first page I opened had the photo you see above.

I remember the moment. I was walking with my boyfriend Bobby when someone yelled from a moving car and took our photo. I thought it was true love, but it ended months later, his choice. Like Lenora, one of the main characters in Peace, Love, and You Know What, I fell hard in love and suffered when things didn’t work out.

Here is a scene from the book. Mack and Tim are talking about a three-day graduation bash they are going to hold at their crummy apartment.

“Make sure Lenora hears about it,” Tim said.

“A party without Lenora? Our queen? No way. Hey, Tim, maybe you should do the asking.” His grin got bigger. “She should be over that last guy by now. What’s his name? Tadd?”

“Brad. What kind of a name is Brad? Sometimes I wonder about Lenora’s choice in guys. At least he’s gone.” Mack’s brow pinched. “Doesn’t it take Lenora six weeks to get over a guy? I believe it’s time to finally make your move, Tim. She’s outta here next week.”

Tim sighed. Lenora’s last relationship was a close one. Things were getting heavy with the guy, a friend of Joey’s hiding out from some trouble in California. But Lenora’s romances lasted three months tops, the guys drawn by her open heart, soaking in her love as if it were sunlight, until it drove them away. Tim held her while she cried enough times to know the story. Her ex-boyfriends said they were living in the here and now. They reminded her about the war in Vietnam. Her response? War was all the more reason to be in love. They didn’t see it her way. She took the breakups hard, sobbing in her room, playing dreary folk songs like Dylan’s “Don’t Think Twice, It’s All Right” and snarling at the lines. She stopped eating, got real skinny, drank, and smoked too much pot, embarrassing herself a little in public. She wrote sad or hateful poetry until she came to her senses or lost interest.

Yup, that about sums it up. By the way, the alum office wants a hard copy of the book when it comes out. I did warn them it’s a bit raunchy.

UPDATE: Oh, so close on the paperback edition. Until then, here is the link to the Kindle version: https://www.amazon.com/Peace-Love-You-Know-What-ebook/dp/B01E03WMQC?ie=UTF8&*Version*=1&*entries*=0