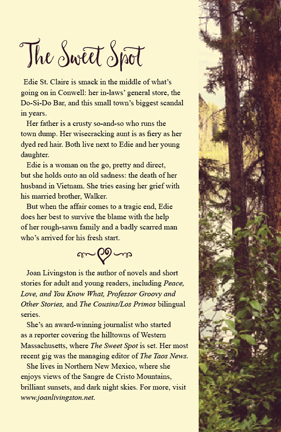 You’d like to think that everyone living in a small town would get along, but from my experience that isn’t true. When I was a reporter in the hilltowns of Western Massachusetts, I witnessed some doozies. I even wrote about them. And, yes, I’ve included feuds in The Sweet Spot, set for a Feb. 20 release in paperback and Kindle.

First, here’s the real stuff. Dogs are a big source of neighborhood feuds. Barking dogs. Wandering dogs. And, of course, biting dogs. When I was a reporter sitting in board of selectmen’s hearings, I saw perfectly nice people go at it. (A board of selectmen is like a town council, but New England-style.)

I once covered a great pig feud between newcomers, who didn’t like smelling the animals next door, and the local guy, who didn’t seem to mind because he was raising them for meat. When the newcomers complained, the pig owner just moved the pen closer to the property line. The feud went to the Board of Health, who actually ruled in the pig owner’s favor. (Tony Lake, who later became Bill Clinton’s National Security Adviser, spoke in favor of the pigs.)

Then there are the feuds that are more personal, like an affair, sloppy flirting or some wrong done a long time ago I didn’t know about. I remember one guy who lived way out in the sticks giving the road guys a hard time. I also recall a notorious feud between members of a town department.

The first involves Edie St. Claire’s father, Alban “Benny” Sweet, and the town’s road boss. Benny, a cantankerous but lovable old fart, runs the town dump. He keeps borrowing stuff like tools from the town’s highway department and, of course, doesn’t bring them back. It ticks off the road boss, who gets his revenge by plowing and grading their road the very last.

Edie becomes party to the second feud. But this one doesn’t just involve one other person, but a whole family following a tragedy. They put the blame all on her, and, man, they’re awful to her.

The excerpt below gives you an idea about the feud between Benny and the road boss.

Edie heard shouting from inside the house, and when she checked the kitchen window, the road boss and Pop were going at it near the highway department’s idling pickup. The man’s face was red and his fingers punched the air in front of her father. Pop, just home from the dump, had been hauling his booty into his shacks out back. Amber, she was relieved to remember, took off on her bike to Leona’s.

Edie stepped onto the porch, but the men didn’t notice her until she was beside them. Pop, his overalls caked with dirt, smelled sour and rusty like the inside of a garbage can.

“I told your old man to keep his hands off the highway equipment.” Spit flew from the road boss’ mouth. “Who in the hell does he think he is?”

Edie didn’t like the look on the road boss’ face. She had seen enough bar fights, and her father, although a scrapper, was no match for a man his size or age.

“Take it easy,” she said. “Pop took care of the trimmer. He didn’t mean any harm.”

“That’s not the point,” the road boss said. “It don’t belong to him. All of this is town property.”

“It don’t give you the right, you stupid little fuck,” the road boss said. “Stick to the dump where you belong. I don’t go taking your crap.”

The road boss’ belly jiggled beneath his chambray work shirt as he stepped onto the porch to get the trimmer. He cursed loudly when he noticed a gas can and tools belonging to the Conwell Highway Department. Pop cussed back while the man loaded the stuff into the back of the pickup. Her father trailed him, making certain he didn’t take anything of his, and in his agitation, he tripped. The road boss sniggered as Pop fell to the ground.

Edie bent over her father. Pop was too angry to take her hand although he managed to scramble to his feet when the pickup’s tires spun away. Pop jogged after the truck, and Edie relaxed. She knew he’d only run a few yards before he’d be out of breath. This episode would be over until Pop was brazen enough to borrow something else from the highway garage. The board of selectmen would never fire Pop because no one else wanted his job. Besides, he was popular with the townspeople, especially the newcomers who thought he was a colorful and helpful character.

ABOUT THE PHOTO ABOVE: That’s the backside to The Sweet Spot’s cover by Michelle Gutierrez. The next step is to upload the contents etc. and order proofs.