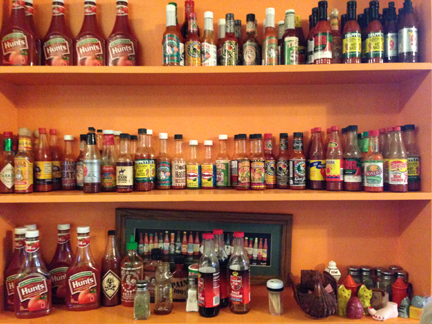 Well, it wasn’t a coast-to-coast road trip, but traveling from Western Massachusetts to Northern New Mexico is a 2,000-mile haul that covers 11 states and three time zones. We did it in three days in our 13-year-old Subaru with umpteen miles.

Since July, Hank has been helping our son, Zack, build his microbrewery — Flood Water Brewing — in Shelburne Falls, Mass. His services as a carpenter were done, so it was time to head home. I flew out to spend the holiday with family and visit friends. I would be Hank’s amiable traveling companion.

My mother kept diaries on the many vacations — think Hawaii, Vegas, California, Portugal etc. — she took with my father, down to the amount they spent on food. She suggested I do the same. Our cross-country trek was not a vacation, however. This was a straight shot to avoid any bad winter weather and get home to Taos as fast as we could. And that’s exactly how it went.

Even so, this cross-country trip is worth a post. Here goes. 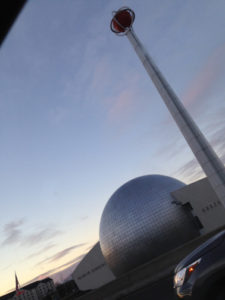 OUR ROUTE: From Northampton, Massachusetts, we headed south through Connecticut then west along I-80. We dipped down to I-70 and stayed with it until West Kansas where we traveled fine back roads into Colorado then New Mexico. The worst part of the trip traffic-wise was through Scranton.

VEHICLE: We’ve had the Subaru Impreza since mile zero. Now she’s up in the 150,000-mile range. We’ve taken good care of her, and she has done the same for us. She got me through commuting in nasty weather when we lived Back East. She’s been on six cross-country trips. The Subaru has some squeaks, and there was a concern along the way about the oil. Her radio stopped working long ago. And, alas, she’s not one of those cushy cars that muffle road noise, so our conversations were typically short and loud. But each morning, Hank gave the car a pep talk — I even heard him call her Sweetie — and he promised her a trip to the car wash and the mechanic for an oil change when we got back. She is also officially retired from any cross-country road trips.

DRIVER: Hank drove the entire way. I’m not the gutsy highway driver he is. I am the in-town driver, where being gutsy is not necessary or welcomed. Hank drove anywhere from 70 to 80-plus mph — being mindful of cops along the way. I admire his ninja driving skills and stamina. We only stopped for gas and the occasional necessary break.

NAVIGATION: This was my job although I had assistance from the Google maps app on my iPhone, which was especially helpful making our way through heavy traffic in the big cities. The narrator did get a little insistent at times when we stopped somewhere although I realize she was only trying to get us back on track. We also had the Rand McNally map book we used on our first trek to New Mexico 10 years ago. I did enter a few posts with photos on Facebook, but I didn’t get crazy about it. 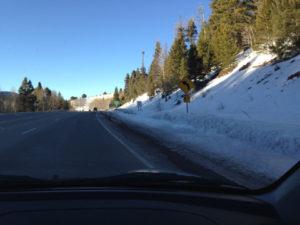 WEATHER: We got out of Massachusetts early Wednesday to avoid a Nor’easter. The weather along the way was clear although windy in parts. The first snow we saw on the ground after Massachusetts was in Colorado.

LANDSCAPE: This time of year, the U.S. is steeped in brownness. Bare trees. Immense farms and ranches with open fields. Windmills. Lots of billboards on the last half of the trip — mostly commercial stuff with the occasional “If you died today would you go to heaven or hell” type of message. I admired the prairie grass in Kansas.

ROAD CONDITIONS: Dry and well-maintained highways for the most part. Lots of trucks.

LICENSE PLATES: My favorite vanity plate was in Connecticut: McLovin. I imagine the owner is a fan of the movie Superbad. 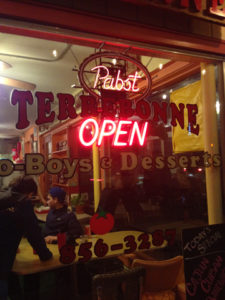 ROAD FOOD: We did bring food and water with us. Nothing fancy. We only stopped for dinner. The worst food was at a Mexican restaurant I won’t name, but it could have been a scene in Breaking Bad. The best food was at Terrebonne in Lawrence, Kansas, where we had po’ boys and wheat beer. It’s a tiny place with funky tables and chairs. Think somebody’s dinette set from the ’50s. The people were friendly and the food, tasty. We were told it was a locals’ place.

MOTELS: We slept two nights on the road, nothing fancy, but nothing crappy. At the first in Springfield, Ohio, I met a guy who was traveling from Maine to Taos with his dog. He and his wife were spending the winter. The second night, we stopped in Lawrence, Kansas. Good rates at the Virginia Inn although unfortunately some trucker parked his rig near our unit so its engine kept cycling.

SITES WE PASSED: We were not tourists this time, but I was amused by the sign for the world’s largest wind chimes in Casey, Illinois. Jim Bolin, owner of a pipeline and tank maintenance firm called Bolin Enterprises, gets credit for the chimes, plus the world’s largest golf tee and knitting needles. What’s next? World’s largest chopsticks? However, there was no convincing Hank to stop. We passed signs for many historic sites and, of course, the Eisenhower Presidential Library and Museum.

WILD ANIMALS: Hawks were the most popular bird species on this trip. (Unfortunately, we spotted several dead ones along the highway, likely victims of speeding tractor-trailers.) In southern Colorado, which is open range country, we saw immense herds of elk foraging through the snow for grass plus wild horses. I was glad we were traveling in daylight.

HOME AGAIN: We arrived just after six on Friday, thankful our little car made it. And when the motor was cool enough, Hank place rubber mats on the engine and containers of mothballs to deter the rabbits from chewing the Subaru’s wires. Yup, we were back home in Taos.

ABOUT THE PHOTO ABOVE: Shelves containing salsa and other seasonings at Terrebonne.

ONE MORE THING: I resume writing about my upcoming novel The Sweet Spot with the next post.