Today, I am turning the tables on myself and answering the questions for my 6Ws series. I’ve been inviting fellow authors to participate, so why not me? After all, Redneck’s Revenge, the second book in the Isabel Long Mystery Series, is being

And, dammit, this is my blog.

Who is author Joan Livingston?

I have had many roles in my life. The first of four kids. A second-generation American of Portuguese heritage. The first to graduate from college. Wife (twice). Mother of six. Grandmother of two.

For a while, I moved around a lot. I’ve lived in big cities and very small towns, which is my preference and the setting for much of my fiction.

But when it comes to words, I was a journalist for thirty years — rising from a correspondent to managing editor of an award-winning newspaper.

So now I am an author currently immersed in my Isabel Long Mystery Series.

I have struggled with the business side of writing. I’ve gone through two agents and a countless number of rejections from publishing houses. I’ve tried self-publishing. Crooked Cat Books is the publisher for the first three books of Isabel Long Mystery

Series. (Yes, there will be more.)

But rejection doesn’t stop me from writing because it’s what I love to do.

What do I write?

Right now I am immersed in the Isabel Long Mystery Series. As stated above, the second has a Sept. 26 release. Chasing the Case was released in May. The third, Checking the Traps will be published by Crooked Cat Books in 2019. Last week, I found inspiration for the fourth. I am terribly excited.

But I write in other genres. A few of my books are what I would call literary fiction. I have also written a series for middle-grade readers and a bilingual series for children. A good percentage of these books have not been published.

When did I begin writing?

I began writing as a child through the encouragement of great teachers. In college, I wrote poetry because, to be honest, I could not sustain a thought in prose. Then I had a writer’s block that lasted 25 years — much of it while I was mothering six young kids. My first semi-break was when I became a reporter covering a rural area in Western Massachusetts. But I didn’t start writing fiction until I became an editor. The block broke for good and it is a rare day I don’t write fiction.

How do I write?

I just sit at the computer and let the words all come onto the screen as fast as my fingers can type them. I don’t plan ahead or use any programs. No outlines. Without sounding like a totally crazy woman, it’s a rather telepathic experience.

Sometimes ideas come to me as I am falling asleep or doing some brainless chore.

Of course, there is rewriting. Sometimes I will stop part way, print out the pages and see how I’m doing. I might decide to add a scene. Or I will note as I go along a detail that needs to be resurrected later.

I liken rewriting to taking up a daydream and making it better.

As for the time of day, I usually write very early in the morning, but if an idea hits me, I will write later in the day.

Where do I write?

I can write most anywhere. I believe I developed my powers of concentration working in busy and noisy newsrooms. But my favorite spot is a desk my husband, Hank, built for me. He was on a job site when a woman told him to throw out old 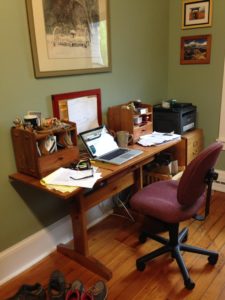 boards that were used for shelving. It turns out they were black walnut. He’s also built me great wooden storage units for the top of the desk. Then there are the funny bits of things, rocks and figurines I’ve collected.

Why do I write?

I write because I can’t help myself. It is definitely my form of expression.

Her next case. She’s in it for good.

Isabel Long is in a funk months after solving her first case. Her relationship with the Rooster Bar’s owner is over. Then cops say she must work for a licensed P.I. before working solo.

Encouraged by her Watson — her 92-year-old mother  — Isabel snaps out of it by hooking up with a P.I. and finding a new case.

The official ruling is Chet Waters, an ornery so-and-so, was passed out when his house caught fire. His daughter, who inherited the junkyard, believes he was murdered. Topping the list of suspects are dangerous drug-dealing brothers, a rival junkyard owner, and an ex-husband.

Could the man’s death simply be a case of redneck’s revenge? Isabel is about to find out.

Other published works: Chasing the Case; Peace, Love and You Know What; The Sweet Spot; and  The Cousins and the Magic Fish/Los Primos y el Pez Mágico.

One last thing: Join me for the Facebook launch part Wednesday, Sept. 26, 2 p.m. EST wherever the heck you are. I will leave it up for 24 hours so people can pop in when it’s convenient. Here’s how to connect: Redneck’s Revenge Facebook Party