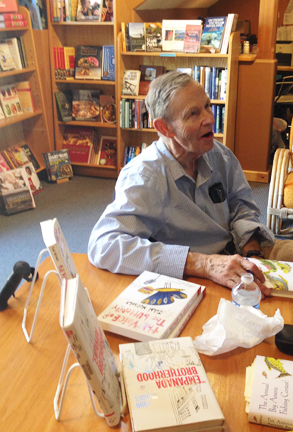 On Saturday, Taos author John Nichols did a reading from his latest novel, The Annual Big Arsenic Fishing Contest! I liked the book when I read it, but I liked it even better when I heard him say it out loud.

For those who haven’t read the novel yet, it depicts a wild romp by “three idiots,” as Nichols called them, that lasts many years. Yes, it’s mostly a comedy.

I reviewed Nichols’ novel in September, after it was released by the University of New Mexico Press, and he was set to do a reading at Brodsky Bookshop in Taos. Here’s the link to the review in my column, The Write Stuff, that appears in Tempo: The Annual Big Arsenic Fishing Contest

Nichols read Saturday at Op Cit Books in Taos, which was also celebrating its first anniversary. Needless to say, the upstairs was filled with fans. Nichols didn’t disappoint them, reading at length from three sections.

He’s an old hand at reading. After all, this novel is number 21. Likely his best known is the Milagro Beanfield War. His next book, about his connection to the natural world, should be out early next year.

Afterward, we who had copies of the novel lined up to have them signed. I’ve been to readings where the author is typically a friendly signer, but Nichols goes beyond that. He’s in no darn rush as he talks with the book’s owner and writes a rather lengthy note inside accompanied by a drawing of a rather devilish-looking angel.

When it was my turn, Nichols thanked me for the review. We talked about writing. He goes at it when most of us are sleeping aka the graveyard shift. There are no distractions then, he explains. He writes in notebooks then types the text into a computer (he’s a fast typer) and prints the pages. We talked about the publishing industry, his former agent and editor. He asked if I wrote.

It was a delightful conversation, and I would have asked him more questions — an occupational hazard from being a former longtime journalist — but there was a line behind me. We shook hands, again.

Later, I read what he wrote in my copy. Yes, he included the cartoon. It made me smile.

ABOUT THE PHOTO ABOVE: That’s John Nichols in conversation with a fan.