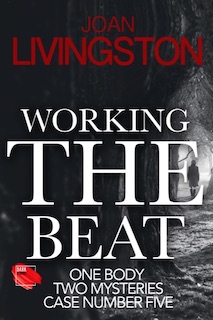 One mystery that leads to another…

Isabel Long stumbles into her next case at a country fair when she is approached by a woman whose grandson’s body was found there four years earlier.

Shirley Dawes took in Lucas Page after his mother had abandoned him, doing her best after failing to protect her own children from her late husband, a no-good abuser. Shirley’s clearly had a hard life although by what people say, she did a good job raising him.

But on a Saturday night, Lucas Page dies in a ravine behind the fair’s demotion derby, and nobody saw what happened. The official ruling was that he slipped and fell.

Once again, Isabel discovers herself drawn to help a desperate person.

When she’s not pouring beer at the Rooster Bar, Isabel is working the beat, a term from her many years as a journalist. That means following a story to the end — talking with the reliable sources she met in her other cases, uncovering secrets, and meeting people of interest, including a few unsavory characters who quickly become suspects. Plus, she can always count on the sage advice of Maria, her 93-year-old mother, her ‘Watson.’

Along the way Isabel finds compelling evidence that Lucas might have a connection to a string of break-ins in the hilltowns — yet another unsolved mystery. Was Lucas part of a ring of thieves? Or was he trying to do the right thing but died as a result of it?

Isabel soon has her hands full with case number five.

Here’s the link to buy: mybook.to/workingthebeat