Shakespeare used those words to begin his play Richard III. Steinbeck borrowed them for the title of his last novel. I believe it is an appropriate description for those Back East who are suffering through this winter’s staggering amounts of snow and cold.

I have spoken with my family who live there. One daughter reports over six feet of snow in the back yard and hiring people to tend to the roof. The snow is deep even where my parents live, in Buzzards Bay, which tends to have milder winters. This morning my mother said snow was falling again. Soon she won’t see the top of her fence.

A friend posted a photo on Facebook of West Island in Fairhaven, Mass., that shows ice extending to sea. The fire department has had to chop through eight inches of ice in the New Bedford harbor for the fishing boats.

Yes, we do have winter in Taos. We are at the same latitude as South Carolina but we are at 7,200 feet elevation or higher. Temps have 30-degree differentials between night and day. We get snow, dry stuff, mostly in the mountains where it belongs. Down on the mesa, it doesn’t stick around too long because of the sun. We had a dusting this morning. Big deal, eh? 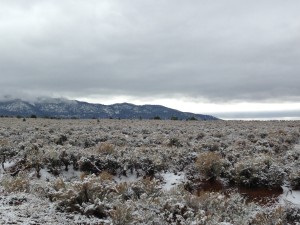 Snow on the sagebrush

But I survived tough winters when we lived in the boonies of Western Massachusetts. Snow storms that caught us by surprise. Ice storms — the absolute worst — that lasted days. Lingering cold. One month it didn’t get above the 20s so road salt didn’t work.

I hated commuting during the winter even though the road crews did a great job. I knew their schedules. I left at 6:10 a.m. for work because a plow truck would make a sweep of the steep hill outside our home at 6 a.m. The crews in the towns I traveled were out early, too. If a storm came while I was at work, I left at 1 p.m. It wasn’t worth going at noon, because the guys always broke then for lunch. If necessary, I found places to stay overnight — with one of the kids, when they went to school, or with a co-worker.

I stored three buckets of sand in the back of my Subaru for ballast.

I watched the weather constantly.

I waited for spring.

Our former home in western Massachusetts during a snow storm.

When we moved to Taos, I swore I would never commute to work. I succeeded with  an 11-minute drive. We have had snow-covered roads. But people tend to stay off them so the traffic is light.

I am planning a trip Back East next month to visit family. I don’t imagine 100-inches or more of snow in Boston will be gone by then. But to tell the truth, I am curious to see that much of it again.

One thought on “The Winter of Our Discontent”