Author Miriam Drori has written this post about a character in her latest book, Cultivating a Fuji. She writes about Martin Carter, the book’s main character. Here’s what Miriam says about Martin: “Probably every reader has met a Martin at some time in their lives. Did they worry about 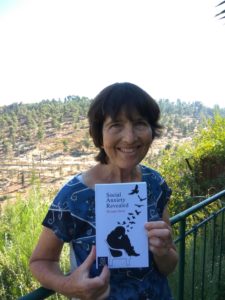 him? Did they wonder how he came to be like that? Or did they just laugh and move on?” Intriguing.

I have a confession to make. Miriam is also my editor, so I am looking forward to reading her book.

Here, I will let her tell you about Martin Carter.

Who is your character?

He’s called Martin Carter. He comes from London, lives by the sea in Bournemouth and works there as a computer programmer. This is 1977. Nowadays, he’d be called a software engineer.

He looks normal – short brown hair, blue eyes, average height. His clothes look a bit geeky sometimes, or maybe it’s just the way he wears them. But still, he gets mistaken for normal. Until he opens his mouth.

What is your character’s back story?

What stands out in Martin’s childhood is bullying. He was the one all the children loved to make fun of. The adults in his life provided no support whatsoever. The teachers believed children had to solve their problems on their own. His parents were too wrapped up in themselves to be able to help in any way.

What is your character’s role in your novel?

Martin is the main character. His whole life is laid bare in the novel – not as a series of episodes, but rather via two main events, decades apart, that elegantly divide the novel into two parts. In the first part, Martin is sent to Japan. In the second part… you’ll have to read the novel to find out.

Why should readers care about this character?

Probably every reader has met a Martin at some time in their lives. Did they worry about him? Did they wonder how he came to be like that? Or did they just laugh and move on? Many of the characters in the novel choose the last of those options, but fortunately not all of them do. Even those who make the effort struggle to make him out. But readers have the advantage of being able to delve deeper inside his head and emerge with a better understanding and possibly empathy.

Give a brief excerpt featuring your character.

In this excerpt, Martin has just paid a visit to Kevin, who’s in hospital. Kevin was all set to go to Japan when he broke his leg. That’s why Martin’s going instead.

Martin retraced his steps to the hospital entrance, an easy task when you simply had to follow the EXIT signs. On the way, he paused at a flower shop. Inside, a man was looking around at the flowers, some in pots, others in bunches. A woman was talking to another, presumably the assistant. A pink rose leaned towards Martin from the other side of the glass, and seemed to be smiling. If the rose were a person, Martin thought, it would have tried to start a conversation with him and given up.

Martin studied the smile. Was it kind or leering? He couldn’t tell. With people he could; they were much more transparent. Often Martin was sure he knew exactly what they were thinking simply by watching their faces. Mostly, they were thinking something uncomplimentary about him.

Martin hadn’t noticed the flower shop on his way in. He’d been concentrating on finding the way to Kevin’s ward in orthopaedics. Following the signs along several corridors. Trying to look as if he knew where he was going so that no one would ask if he needed help. Turning on his heel when he reached a dead end and trying again. Once in the ward, looking carefully at each face he passed until he found the one he recognised, even at that unusual angle.

Should he have bought flowers for Kevin? He wasn’t sure, but he thought that might be something normal people did. Never mind. It would have been too normal an action for him. Kevin wouldn’t have expected it. He was probably surprised that Martin turned up at all, and he wouldn’t have gone if John hadn’t suggested it. Martin had considered making the excuse that he’d only just got back from the passport office and tomorrow he’d be busy packing, but in the end the visit went well and he was glad he’d made the effort.

A man standing in the doorway of the flower shop addressed Martin. “Excuse me, can I help you choose some flowers for a patient? We have some lovely, fresh chrysanthemums. Or our daffodils would make a fine present. Would you like to take a look?”

How dare he assume I want to buy his flowers, was Martin’s immediate thought. Just because I’m looking doesn’t mean I want to buy anything. I wasn’t even inside his stupid shop.

“No!” Even Martin was surprised at the volume of the word that came out of his mouth. The vendor was clearly taken aback. Martin turned and marched past him towards the exit. Serves him right, he thought, although he was beginning to wonder whether the flower-seller really deserved that response. He’d been annoyed at being disturbed from his reveries, and had directed his anger at the man who was really only doing his job. Never mind. That was the advantage of interacting with strangers. You didn’t have to see them again and know they remembered a previous embarrassing incident.

Convinced that his imperfect, solitary existence is the best it will ever be, Martin unexpectedly finds himself being sent to represent his company in Japan. His colleagues think it’s a joke; his bosses are certain he will fail. What does Martin think? He simply does what he’s told. That’s how he’s survived up to now – by hiding his feelings.

Amazingly, in the land of strange rituals, sweet and juicy apples, and too much saké, Martin flourishes and achieves the impossible. But that’s only the beginning. Keeping up the momentum for change proves futile. So, too, is a return to what he had before. Is there a way forward, or should he put an end to the search now?

Gradually, as you’ll see when Martin looks back from near the end of his journey, life improves. There’s even a woman, Fiona, who brings her own baggage to the relationship, but brightens Martin’s days. And just when you think there can be no more surprises, another one pops up.

Throughout his life, people have laughed at ‘weirdo’ Martin; and you, as you read, will have plenty of opportunity to laugh, too. Go ahead, laugh away, but you’ll find that there’s also a serious side to all this…

One thought on “Meet Martin Carter of Cultivating a Fuji”