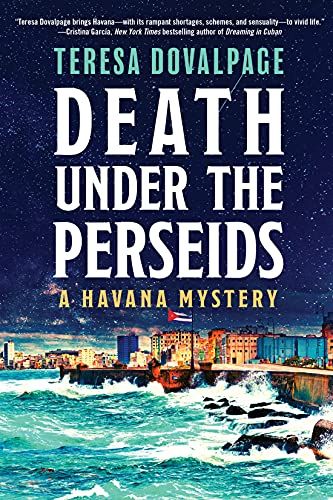 This is a pitch for readers who like a good mystery in an exotic setting. I am writing about Death Under the Perseids by Teresa Dovalpage — the third in her Havana Mystery Series. And for Kindle readers, it’s a deal at $2.99 for the month of June.

I will get right to it. Here’s the link: https://amzn.to/3xjidj2 You can also get Death Under the Perseids in hard cover, paperback, and audiobook.

So what’s Death Under the Perseids about? Cuban-born Mercedes Spivey and her American husband win a five-day cruise to Cuba. Mercedes is a bit wary. Afterall, who wins a free trip like that? She goes along since this trip might be good for their marriage. But once aboard, Mercedes meets other people connected to a former boyfriend Lorenzo — and they coincidently won free cruises. Things heat up as one person disappears and another dies under mysterious circumstances. And then Mercedes has to search Havana to find her husband who has gone missing.

What I especially like about this Death Under the Perseids is that the writing and story capture the author’s energy. It’s a lively read with enough darkness to keep one guessing.

Now let me tell you about Teresa, or la Te as I call her. She writes with authenticity about Cuba because that’s where she was born and lived until she came to the U.S. as an adult. Now she lives in New Mexico, where she is a Spanish and ESL professor at New Mexico Junior College. She is also the author of nine novels and three collections of short stories. (And she is the one who inspired me to try writing mysteries. Gracias, la Te.)

We met when I lived in Taos and took the Spanish 101 course she taught at the local branch of the University of New Mexico. Then she started reporting on a freelance basis for The Taos News — I was the editor-in-chief then — for our Spanish page, plus writing features in English.

We became friends. I enjoyed her energy, humor, and Cuban coffee. We even collaborated on a project — a bilingual series for kids. Now that we live more than 2,000 miles apart, we keep in touch via social media, email, and the occasional phone call. I can also reread her books since I own nearly all of them.