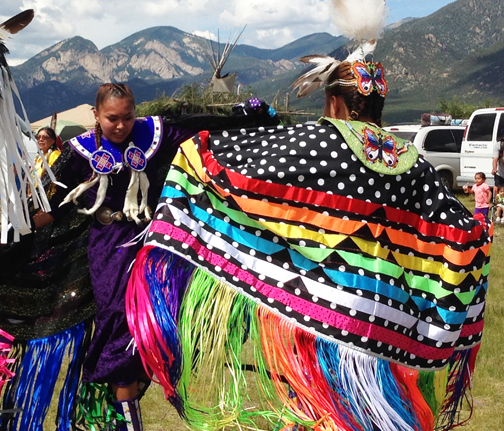 It’s hard to sit still at a powwow when Native people are dancing and drumming. But I did for a while because of the flow of feathers, bells, and ribbons — and the heart-thumping beat. 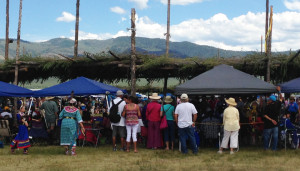 The Taos Pueblo Powwow was this weekend. We went Sunday afternoon, which had such a great turnout we had to park our folding chairs well outside the arbor, where a drumming group took precedence, and behind canopies pitched by families. It was as close as we were going to get to the arena. (Number one rule: arrive early at the powwow to get a good spot.) 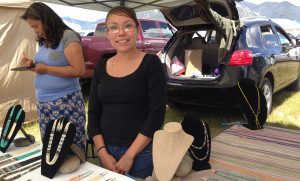 We sat as Native people moved in a clockwork circle in the arena. Many waited on the sidelines for their turn to compete such as the cluster of little girls sitting near us. I marveled at the diversity in their regalia. (Another rule: don’t call them costumes). Feathers, fabric, beadwork, ribbons, fur, and metal — no two were alike.

But watching the dancing is only part of the experience. This year the powwow had a full outer circle of vendors. Some of the jewelry and goods for sale were touristy stuff, but then there were real craftsmen, mostly from the Four Corners area. I was charmed by the beadwork at one booth to buy a necklace. Jeanne Begay told me it takes her over an hour to make one on a loom — “if there are no distractions.” I paid by check. (Although some vendors take cards, many don’t. So bring cash or checks.) 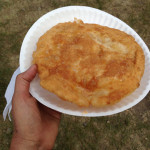 I did get my annual fix of fry bread, choosing Paulie’s, which had the longest line. The longer the line, the better the food, I figure. The man in front of me ordered $63 worth of fry bread prepared in various ways, such as fry bread with a pork chop and burgers. He told his son, “Today we will eat good.” “You mean I will eat good,” the boy responded.

While I waited for my order, I watched two women inside the booth knead dough, roll them into balls, and flatten them for frying in a cast-iron skillet. I chose plain fry bread. I drizzled mine with honey and ate it in the sun, while the dancers moved around. 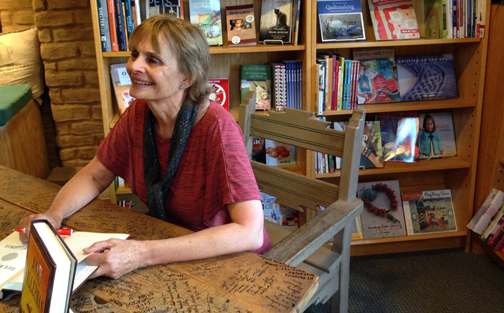 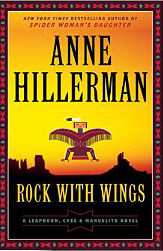 I promised myself I would buy a string of silver beads, Native-made, when I sold my book. It would be my reward. Alas, that hasn’t happened yet despite the earnest efforts of my agent.

So when my parents gave me a gift of money, I decided to spend a little on myself. Yes, you guessed correctly. I bought the necklace I coveted.

I knew long ago to buy the necklace at Tony Reyna’s Indian Shop. Tony, who is 99, is a survivor of the Bataan Death March in World War II and one of the most revered persons in the Taos area. We’ve eaten with his family on Christmas Eve and San Geronimo Feast Day. We’ve bought gifts from his shop, which his son, Philip, now runs.

Philip had a selection of silver beads but not the style — plain not carved  — in the length I wanted. But he said he could order one from a man he knows from Window Rock in Navajo Nation.  Philip called a couple of weeks later. He had a necklace he thought I’d like. Ironically the man from Window Rock came in soon after I left the shop. The necklace just arrived in the mail.

The silver beads go with the three pairs of earrings my sister, Christine, gave me from her collection of Native jewelry. I’ve decided to wear the beads  every day except when I work outside. So far, that’s held true.

As for treating myself when the book is sold. Well, frankly, that would be its own reward.

No comment: I removed the comments option this week. I grew tired of deleting spam from ne’er-do-wells who think they can fool me by offering clever observations and compliments about this website — the same ones over and over. Meanwhile they are pitching Nike and Louis Vuitton. So I wasn’t fooled at all.